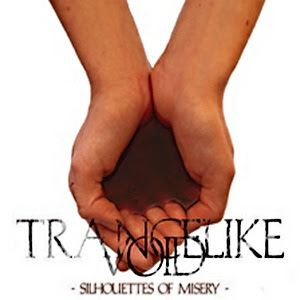 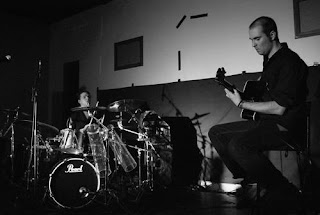 Trancelike Void is a depressive black metal duo from Belgium. The previous album, EP, and split that preceded this album were in a fairly unoriginal style derivative of the main bands that started the style. Taking influences from artists such as Hypothermia and Trist for main influences, these two records take a new approach and can be seen together as a pair.
Unlike many projects or bands that are put into the depressive and suicidal black metal genre, these guys have gone for something totally unique on these two recordings. Unlike their previous recordings, which contained all the stereotypical elements of the style, these releases are pure acoustic records. Done with acoustic guitars, acoustic bass, and an acoustic drum set, no vocals, no distortion, no keys, a very naked and stripped down record.
You really couldn't call the material on here "original," but it's a new take on a style that is populated by many wannabe artists that create mindless drivel and try to pass it off claiming that this is the music that they feel. This first release somehow manages to make a reach towards something original and unique, and by no means is this it, this shows a lot of risk, putting out a pure acoustic record after several blackened destruction's that didn't really leave you with anything memorable. This is similar, but far more open and, if I may say so, darker.
While lo-fi and semi-aggressive black metal can be seen as dark, and for some it is the darkest thing out there, but this just feels so much more desolate and bleak in comparison. Where the genre's mid-paced tremolo picking usually has more in common with anger and rage more so than depression and suicidal feelings, some made it work. On here, the acoustic laden soundscapes bring up more feelings of sorrow, depression, and other themes like that, all without having to even use vocals either.
It's odd that for how repetitive and slow moving, each of these 4 tracks top 10 minutes, these track are, they are still very captivating. My attention was constantly focused on the performances of the instruments, and this is possibly the first time this band has ever drawn me in so much. Everything on here just fits, it's still, once again, not a masterpiece, but it's good none the less.
Overall, this is a unique little album in the catalog of both this band as well as the genre itself. The sound is so bare and stripped down but also so alive with emotion and feeling. If you're into acoustic/folk, or just want something a little captivating, or something to put on before you go to bed, this is for you.
Overall Score: 7.5
Highlights: One Bridge Drowned 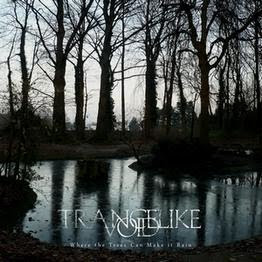 This EP begins where the album left off. In the same acoustic style and performance, you'll get desolate, barren sounding fields of sound that just roll past you. The slow moving passages just seem to entrance you, yet for some reason, this is different.
I really can't say much about this EP that wasn't already said in the above one for it's album counterpart. Almost everything is similar, if not the same to that one except the haunting desolation. Where as the full-length was dark, foreboding, and depressive, this EP is similar, but is perhaps a bit more "up-lifting," you might say. Some of the passages are just more uptempo and are not as desolate as before. This EP also doesn't contain that something that just draws you in like it's predecessor did.
Overall, this is just more of the same. If you enjoyed the full-length, you'll probably enjoy this one just as much. If you haven't heard either yet, check out the full-length first.
Overall Score: 5
Highlights: Ghost Mountain

Posted by maskofgojira at 11:40 AM