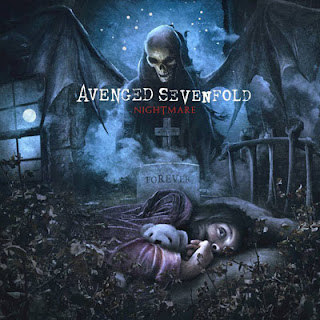 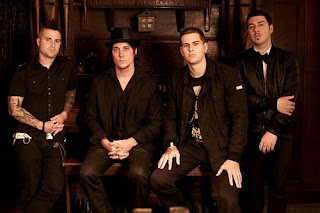 Avenged Sevenfold is a hard rock/heavy metal band from California. The band garnered mainstream success after their 2005 album, "City of Evil," was released. The band has remained a steady line-up since 2002, but this is the first album after the tragic death of their drummer late last year.
After 2007's self-titled record, "Avenged Sevenfold," which had some critics believing that the sound on that album was a bit too eclectic and not focused enough, the band began work on what would become a then-concept album. The band themselves had stated that it would be both their darkest and most epic album yet. Until the death of their drummer, The Rev, the band had been recording the album with little to no problems. After a few months of recuperating, the band recruited legendary Dream Theater drummer, Mike Portnoy, to record the drums and tour with them for a while to support the album.
Despite whatever opinions over the choice of the drummer, performance, or whatever, this album shows the band at what could be their peak of songwriting. On this album, the band pull off both their heaviest and their softest songs easily as well as retaining the sound they've created on the last two records. Every member on here isn't pulling any punches, with guitar solos being even more varied than before, using both shredding but also very melodic and soulful ones as well. M. Shadow's vocals have evolved at lot from how they started a definite improvement is immediate, a shift from the winy clean singing he did on "City of Evil" has now transformed into a great croon. Even the bass on here is fully heard and stands out from time to time. The Rev even comes in during the track Fiction on vocals, giving the track a very otherworldly feeling to it, which already has a more theatrical vibe to it, almost 70s during it's bridge.
Tracks like Welcome to The Family and Victim show both stellar musicianship, but also great hooks in the choruses that are sticky bubblegum pop worthy. The heaviness of God Hates Us shows the band at their heaviest yet, bringing more of a death metal style performance as well the the return of growling into the band. Tracks like So Far Away show more of a ballad side of the band using more melancholic and mournful acoustics in favor of electric.
The band also take the eclectic nature of their last album and refocus that almost scatter-brain genre hopping nature into more progressive songs. Buried Alive has been said to be the band's Fade to Black, and it can be agreed upon that it does indeed share a similar nature of building from softer electric guitar lines into a heavy thrash ending. The full-blown ballad Tonight The World Dies is done acoustically but still shows a great amount of variety using both a lap-steel guitar and some more atmospheric chanting in the background, almost giving it a Pink Floyd vibe at certain points.
The album climax comes during the final track, Save Me, an eleven minute epic. This track obviously shows the band at their most progressive and diverse, moving through their signature sound through bits of black metal, prog rock, and thrash. This can said easily that this is the band's most epic song that is sure to turn heads from those that have even chosen to disregard the band.
Overall, this is a fantastic album that has ups and downs and can proudly be proclaimed is a progressive album. This can be an album that the band should know is a fitting tribute to their fallen drummer that does stand tall. If you like progressive, catchy, and somewhat more classic take on metal, this is something you should check out.
Overall Score: 9.5
Highlights: Every Song Is A Highlight

Posted by maskofgojira at 8:25 AM