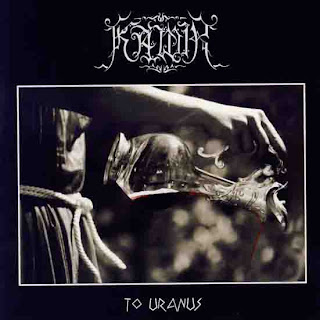 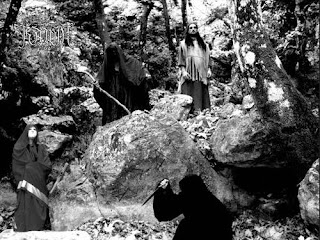 A Compilation And A Half.

Kawir is a Greek pagan metal band. The band formed in 1993 and began playing a style not so dissimilar from what other black metal bands were doing back then. Like many other bands, the original line-up has not lasted throughout the many years the band has been together, leading to only guitarist Thertonax remaining from the band's beginning.
First off, this EP can really be looked at as a kind of compilation of sorts. The first three songs on here are all new while the last three come from a previous EP and a split with Sigh. It's fairly obvious when listening to the different tracks that they were done at different times as well.
Essentially, what you'll find on this release, stylistically, is a mix of pagan melodic melodies with moments of sombre acoustic and folk as well, and straightforward black metal aggressive attack.
Musically, the melodies on here play a very important role of keeping the track entertaining while the vocals are usually shrieked over the top of it, occasionally breaking into some chanting. This is pretty much the basis for the whole EP, it keeps a pretty much standard approach towards pagan metal, though coming out as one of the earliest Greek black metal bands does give it a bit more credit for keeping a less refined sound. The third track, Kourites, does esque that for a while in favor of more fluid, and audible, bass lines that make the track stand out a bit more from the opening two.
Now for the second half of this EP. The first track, really fourth, Sinn (The Blazing Queen) was taken from a split EP done with Sigh back in 1994. This track has a much darker sound with very raw production, keyboards that are mixed way too high, and vocals that sound more like the vocalist is vomiting on the mic, in some ways, this track is better than the three newer tracks. The final two tracks, Eumenides and Adored Cry of Olympus, both come from the 1994 "Eumenides" EP. Like the track that came before them, these songs too feature weaker production, but feature better song-writing, using more complex arrangements in both tracks.
Overall, this is a decent release when taken for what it is. There isn't too much that I, personally, found appealing about this EP, but others most likely will. If you're a fan of early black and pagan metal, this is something you'll probably going to want to check out.
Overall Score: 5
Highlights: Kourites, Adored Cry of Olympus

Posted by maskofgojira at 8:50 AM