Hell Militia - Last Station On The Road to Death 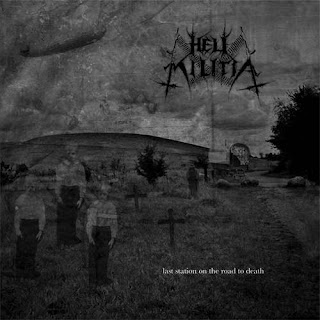 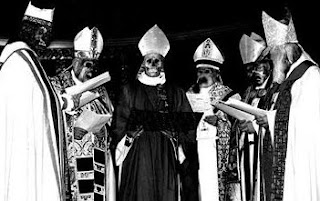 This Is Exactly The Type Of Stuff The Man Upstairs Likes To Hear.

Hell Militia is a black metal band from France. This is the band's first release since their debut in 2005 and follows in the same vein with raw, aggressive black metal. This group is considered a super-group by most due to the credibility some of the members have within the black metal scene.
Anyone that comes into this record expecting any sort of avant-garde or progressive tendencies that might have come in through some of the members other projects will be sadly mistaken. Strong influence from early Mayhem and Burzum records are shown throughout, keeping with a highly raw and morbid sense of writing and performing songs. While this is not nearly as fast as the debut was, it maintains the same sort of darkness and perversion that the debut clearly had.
Nothing on this record, musically, will blow you away if you're familiar with the originators of the genre or even the Les Legions Noires (The Black Legions), vocalist Meyhna'ch was one of the principle members of that scene, playing in the highly respected Mütiilation. The songs on here don't really differ too much from each other, some more mid-paced songs, Unshakable Faith, are really more where this album's core sort of sound lies, there is the occasional fast track, Fili Diabolia, to keep things moving and not getting a bit too monotonous. While not overly an ambitious sounding record, it does keep true to the kvlt sound and doesn't try too hard to get away from it. The band does dabble within the world of covers though, both this record and the debut contain covers, the one of this album being punk legend GG Allin's Shoot Knife Strangle Beat & Crucify.
For those that are familiar with Meyhna'ch's work in the past, it probably would surprise them that this record is as raw and kvlt as possible. The predominance of a raw and kvlt attitude keep this from entering the world of modern sounding production, instead keeping this thing sounding as underground as possible without going into the world Darkthrone were in on their early black metal albums. This record is really dominated by two things, riffs and atmosphere, if you don't find one, you'll get the other, which is really a nice way to approach this record knowing that it's not the most challenging record out there, but that it does accomplish what it's pretty much meant to do, hear the epic The Pig That Became A God for a bit of both.
Overall, this is a decent record that certainly has it's moments. This is not a record that will surprise you in any way if you already know what this is like. If you're a fan of black metal, the true, kvlt stuff, then you probably already know about this, if you want to check it out, this would be a decent starting point.
Overall Score: 6
Highlights: Et Inferno Ego, The Ultimate Deception, Last Station On The Road to Death

Posted by maskofgojira at 8:48 AM