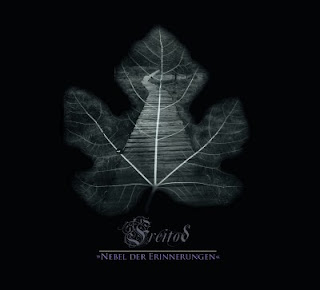 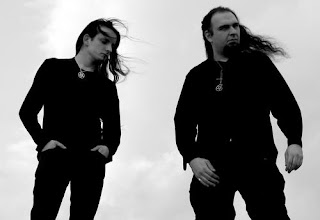 Freitod is a depressive black metal duo from Germany. This is the full-length debut by these guys showing more of a post-rock influence more than their counterparts originators did. But does it have the potential to go farther with it than they did?
Unlike a lot of the records that I've listened to from this genre, never have they had such a lush and open sound as this one does. It's not the best, but it does certainly make the music feel so much more full sounding. This thing still has your big sounding cleans and super distorted metal, but the drums have more "pop" to them, the bass is still very high up in the mix, and the vocals on here are actually able to be translated, not into English, upon even a first listen.
The vocals on here stood out immediately on this album. When in comparison to other vocals on albums within this style, their counterparts feature so much more whispering and talking while the actually vocals are horrid screams that sound like someone is being tortured in your closet, the vocals on here feel much more "black metal" sounding, with raspy yells being at the forefront of the vocals, while the occasional singing actually manages to come out within numerous tracks. Vocals also contain enough revirb to keep them sounding big and raw, but not enough to pester your ears.
The bass on here is well done, probably being the most melodic thing on this album. The bass is somewhat reminiscent of the post-punk and shoegaze black metal coming out now with heavy bass grooves. Most of the time the bass is actually more enjoyable than the guitar for some reason.
Despite any and all positives about this album, there is one great problem that, at least that I, can't overcome. While these songs show potential, sound very good, production wise, have great vocals, they really don't feel like they're going anywhere. I feel that tracks like Ein Ende or Pure Manipulation just seem to wander aimlessly in their own structures. It's unfortunate to say, but I felt myself falling asleep to certain tracks.
Overall, this is a fairly decent album, nothing special, but it is a bit underwhelming. If you weren't a fan of the band already this isn't going to do much more to solidify what you already knew about them. This is for people that really like repetitive black metal.
Overall Score: 4
Highlights: Ein Neuer Tag, Diese Narben, Abwärts