Demonic Resurrection - The Return to Darkness 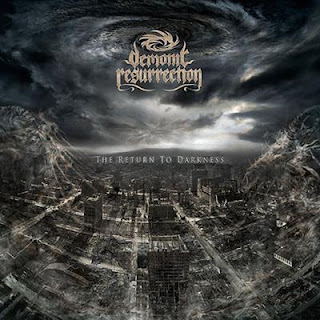 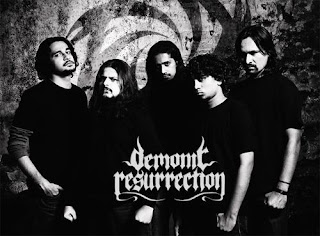 The Darkest Path Awaits You Here.

Demonic Resurrection is a progressive black/death metal band from India. Thanks to the film "Global Metal" that has recently come out, this band has garnered a bit more success. This is the band's third full-length album and the final chapter of the darkness saga that began on their second and continued on a later EP.
For those that have not heard Demonic Resurrection's past work, this is a bit of a departure from that. Previous albums have demonstrated a much larger use and influence of black metal, fast, tremolo picking, screeching vocals, and epic keyboards. This album on the other hand takes a bigger influence from death metal, switching out the tremolo picking for more palm muted guitar work, using lower growls for vocals as well as better clean vocals. The keyboards remain the same with a typical sort of symphonic approach, but works well enough in the context they are used in on here to keep from blowing out your brains from sheer density of key dominance.
The songs on here have improved immensely from the band's previous albums. These tracks are so much more progressive and melodic than ever before and showcase so many more hooks in the songs. Riffs have become more memorable, vocals lines are more varied, symphonic keyboards are used more for emphasis and depth rather than providing the main melodies, and solos are being played better, listen to A Tragedy Befallen for all of them. This album just has so much more life and originality than its predecessors did, not to say that those were bad albums, but this is definitely an album that will be much harder to top.
There are even a few nods to other genres in certain songs on here. Bound By Blood, Fire and Stone and Lord of Pestilence lean towards traditional prog metal bands like Dream Theater and Fates Warning style of playing while A Tragedy Befallen has hints of power metal in it's riffs and clean vocals. There are also plenty of throwbacks to previous releases, Dismembering The Fallen, really recalls a symphonic black metal sound more than almost any other track on here. The final two tracks on here even manage to incorporate a bit of neoclassical guitar playing on it as well.
Overall, this is a great release that is sure to win over a lot of new fans for this band. Definitely a unique album with a lot of different turns on it. If you're a fan of progressive metal, and all of it's sub-genres, this is well worth checking out.
Overall Score: 9
Highlights: The Warriors Return, Lord of Pestilence, Omega, I

Posted by maskofgojira at 12:01 PM