The Funeral Pyre - Vultures At Dawn 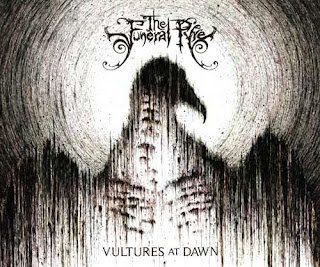 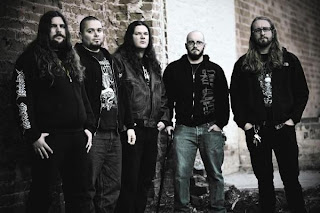 If You're Gonna Go Black, You Might As Well Go Kvlt.
The Funeral Pyre is a black metal band from California. This band has undergone numerous line-up changes and seems to have moved the band's style into a different direction than their first album might have suggested. After several records of evolving their sound from a symphonic metalcore sound, the band has finally reached the sound of black metal.
Listening to the earliest incarnation of this band, you can hear traces of black metal within their sound, but it was more of a symphonic metalcore band. Over the years, with each new release and line-up change, this band has evolved their sound into pure black metal, ala Dark Funeral. The band decided on their last release, 2008's "Wounds," to forgo keyboards for a more aggressive sound, and this album removes more melody in favor of pure blackened fury. I can't speak for everyone, but in my opinion, bands that go for straight brutality with black metal have to play their craft extremely well to keep my attention for an entire record.
On this record you'll hear tremolo picking, raspy screams, and very little subtlety. This record is really played by the band in two speeds, you have the very fast and aggressive side, and then you have the slower side that is a bit more on the doomy side. There really isn't any middle ground to be found, even on longer tracks like Monolith and Clarity of Time, it's just one of the two. This factor is one of the biggest reasons that this album becomes increasingly boring with each track, once you get over the first 3 opening tracks, the rest aren't going to do anything different, though they are some of the better tracks, they aren't really all that special anyway.
For some reason the the production is a bit odd sounding on here. While things don't really sound great, everything is kind of muddy, you can still make out what's going on, but then the vocals come in. The vocals on here are just way too one dimension, even when the band double them up with some growls, this seriously sounds a bit too lack-luster for vocal production. Then, there are the guitar solos, which alone are fine, but the production on them is simply awful, especially on a track like Destroying Gods, they are made way too loud and have too much reverb on them, to the point where they just stick out like a sore thumb for most tracks.
Overall, this is just another black metal release, nothing all that special. Nothing on here is going to strike you anymore than on another black metal record. If you're a fan of the genre or this band's older work, check it out, otherwise, there's stuff out there that's a lot better.
Overall Score: 4
Highlights: Blistered Hands, Clarity of Time

Posted by maskofgojira at 5:56 AM