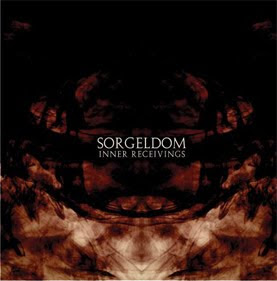 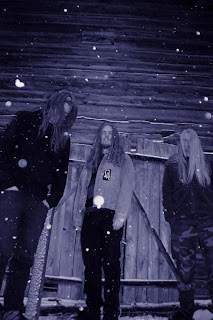 The Gift That Keeps On Giving.

Sorgeldom is an experimental black metal band from Sweden. Originally formed in 2006 by Jodöden (guitar, bass) as an acoustic project, Dr: Sundén (vocals) and J. Marklund (drums, keyboards, clean vocals) joined in 2008 and the trio began moving into a more metal direction. This album follows up their debut "Innerlig Förmörkelse" that was released last year.
Once this album starts you realize that this sounds a lot better than their debut album, for those that have listened to that album. The debut contained that very post-black metal style of production, which I don't find the best, where the clean and acoustic guitars sound good, but the distorted guitars are really hazy and fuzzy. This album does not feature that problem, the tremolo picking that opens I Kloaken Lättar Vi Ankar is distorted, but is a lot cleaner sounding and "ear friendly."
This album's sound has become a lot more progressive, embracing a bit more of the post-black metal sound than their debut did. The cleaner/acoustic moments on this album evoke a bit more melancholic and mournful nature than their debut did, and are not anywhere as cheesy as the debut's use of them either. On the other side of the guitar though, the electric if you didn't get that, obviously are going for a more original, if not progressive, sound by making use of more angular and odd sounding riffs. Keyboards are also not overly used, rarely even making an appearance that is noticing, but the times when it does come up, it does strengthen the idea of becoming more progressive.
These types of things sound rather unoriginal written out, but they are actually done a bit differently from either style in particular, as full songs don't carry with them a particular sense of depression or any sort of shoegaze melodies that really make you think of bands like Alcest or Heretoir. The progressive nature isn't so clear or as up front either, making itself known more in certain riffs and structures rather than long virtuosic playing or avant-garde weirdness.
The vocals on here are actually pretty different, but that's what to expect from two different people providing vocals. Dr: Sundén's screams and growls are very feral and fit the black metal vocalist style to a t while Marklund's singing is done in an almost baritone semi-operatic kind of style, hear the title-track, Inner Receiving. While most tracks feature Dr: Sundén's screams as the dominant vocal style, tracks like Summer Day and Drömmarnas Galax are exclusively performed by Marklund, these tracks are also the most mellow and soft on the album as well.
Overall, this is a record that actually managed to capture my imagination by allowing elements of two very unique sounding genres to come into their already fairly comforted sound. This is an album that has a lot to offer a listen, variation, musical proficiency, and interesting structures and parts. If you're a fan of metal that can, at times, be a bit of a challenge or you like to get things that are experimental, progressive, psychedelic, ect., check this out.
Overall Score: 9
Highlights: Dårskapens Karneval, Inner Receiving, I Väntan På Telefonsamtalet

Posted by maskofgojira at 7:11 AM