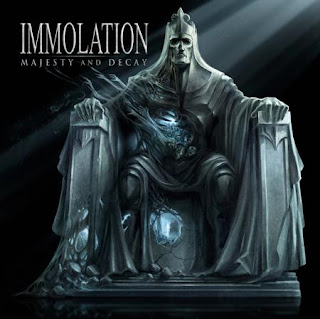 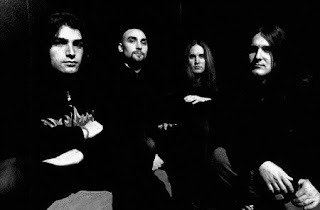 Cracks In The Foundation Show Signs Of Wisdom.

Immolation is a death metal band from New York. This is a band that has been around since the mid-80s and has always been regarded as one of the most original bands to emerge around death metal's beginnings. This album continues in the stream of their previous albums with a much improved production.
Immolation have always been a band, since their inception, that has had a sound that was, and is, uniquely their own. While their music has treaded the grey area between technical and brutal death metal, like their NY companions Suffocation, they have always had a bit more black metal than any of their companions did. The use of darker atmospheres behind brutal songs has made this band one of the hardest to try and copy. Although that one factor has made Immolation so different, it can also be called their flaw, as many see the atmospheres hindering the music from maintaining a consistent level of aggression from start to finish.
This album won't change opinions in that regard, but it does have some of the band's best songwriting to date on here. There are plenty of death metal blast-beating on this album, but there are also more mid-tempo songs like the title-track, Majesty and Decay and A Glorious Epoch, that are much more open and atmospheric, sometimes bordering on sludge. Vocalist/bassist Ross Dolan still has his very low growls sounding effective and understandable as ever. Nothing, musically and vocally is too different from the last album.
Once again, the song-writing on here is what makes this a good album. Shorter and concise songs allow the band to give you plenty and then move on while not dwelling on a track that goes on for over 5 minutes, which only happens twice on here. Despite having most songs clock in at under 5 minutes for most of the album, the band manage to fit in plenty of melodic guitar solos, catchy vocal lines, and groovy riffs. Songs seem to have a longer-lasting effect after listening to songs like The Purge and A Thunderous Consequence that have some of the best riffs and melodies the band has ever had. The final track The Comfort of Cowards contains some of the band's best atmospheres yet, one of the darkest tracks on the album in fact, and is also one of the tracks that shifts around from slow to fast the most.
Overall, this is an album that is sure to please long time fans of the band, as well as win over a few that might not have been convinced upon previous albums. This is an album that has a good amount of variety on it, whether the listener likes slow and groovy or fast and blasting songs, they should be pleased. If you're a fan of old NY and Florida death metal, or looking for a gateway into the genre of death metal, check this album out.
Overall Score: 8
Highlights: The Purge, A Glorious Epoch, The Rapture of Ghosts, The Comfort of Cowards

Posted by maskofgojira at 10:18 AM