Atra Hora - Lost In The Depths 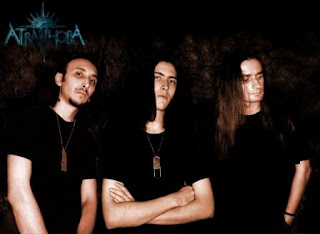 Too Little, Too Much.

Atra Hora is a melodic death metal band from Russia. The band have stated to have been influenced by war, death, philosophy, and chaos, as well as death and black metal music. This is their debut album and it does in fact exhibit all those traits.
Taking cues from more classic-era bands like Dark Tranquillity and Edge of Sanity for their main sound, these guys have that old-school vibe for this album. The modern styles aren't as prevalent within these tracks, remaining firmly found within the production and keyboards for the most part. The song writing isn't as well developed as those bands, but since this is their first full-length release, you can't expect songwriting to be the best out there.
The vocals on here recall that old-school death metal sound as well. Low, but decipherable growls, along with the occasional screams, are the main style and they fit really well with the sound of this record from start to finish. The vocals are one of the highlights on this record, being consistent all the way through. The few clean vocals that are on this album are tollerable, but nothing to brag about, and for the most part, aren't even in most songs.
For the most part, the all of the songs on here are decent, but also, forgettable. I won't deny that these guys are good players, because their performance on here is great, harmonious guitar playing, melodic bass work, and powerful drumming, but the writing side of the band are a bit more lacking. The band make a decent attempt at being more progressive throughout the album, and while they do manage to make some songs stand out with this inclusion, War Under The Sign of Baphomet, others seems to just seem to go into weird directions that end up hurting the song, Requiem For Human Tribe. There are several tracks that are really stellar sounding and are some of the best on this album, Nuclear December in particular is possibly the best song on here with great oriental sounds that flow very well through it.
The epic closing track on this album is titled, Voice of The Forgotten Depths. This is easily the best track on the album, filled to the brim with almost 14 minutes of music. This is really where things seem to meld together, stylistically, for the band, mixing melodic death, prog, and even bits of thrash, perfectly. While all of the styles are all melded together in this song perfectly, it has to be said that this song is where prog does dominate over any other genre, musically anyway.
Overall, this is a decent album that features some more old-school melodic death metal, before it became mainstream and popularized. Plenty of parts to make you headband, but sadly not entire songs. If you're into early death and melodic death metal, check this out.
Overall Score: 7.5
Highlights: Awakening of The Unholy, Nuclear December, Voice of The Forgotten Depths

Posted by maskofgojira at 7:22 AM