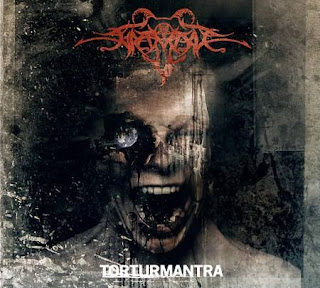 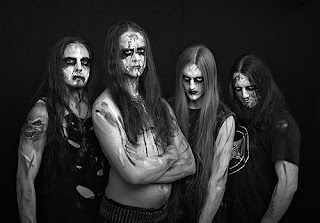 Experience Your Own Pain.

Gravdal is a black metal band from Norway. The band originally began in 2005 as a studio project, the then trio decided to make the band more of a full-time experience. Once a five-piece line-up was formed, the band released their 2008 debut "Sadist" to glowing reviews.
First off, I have not heard this band's debut record, so I can't really make a lot of comparisons to it before listening to this one. From the opening onward, this album delivers some strikingly powerful black metal, one that manages to dip it's feet into more than a few sub-genres along the way. The main sound is certainly black metal, blasphemous and anti-Christian from start to finish, but having enough diversity to keep it both interesting and uniquely different from bands that play the genre straight.
Throughout this nine track affair, the bands sound, as stated above is black metal, but with a lot of other forms of the genre coming into the mix as well. The blend of the very straight and aggressive core of the band with both melody, Slave, progressive, Mishandlet, and atmospheric, Pulsen Vakler, elements does make this entire album a bit more interesting to hear entirely. That's not to say that there aren't moments of pure aggressive black metal, the title-track, Torturmantra, is a track full of hateful and agonizing straight black metal.
Mishandlet in particular is a stand-out on this album. The track features Niklas Kvarforth (Shining) on lead vocals, delivering his uniquely twisted style of vocals as always. While that in itself might mike the track stand out on it's own, the music on that track is a bit different, moving from sombre and melancholic clean tones into heavy riffing throughout it's course several times. The track features an excellent guitar solo as well as some very dynamic twin guitar harmonies near the end of the track.
Overall, this is an album that was very enjoyable and had a lot of great guitar playing. While this is nothing that's breaking new ground for black metal, the performances are great. If you're a fan of black or extreme metal, this is a must for this year.
Overall Score: 8
Highlights: Hydrestund I Helvete, Mishandlet, Klastrert Pa Ambolt

Posted by maskofgojira at 7:28 AM