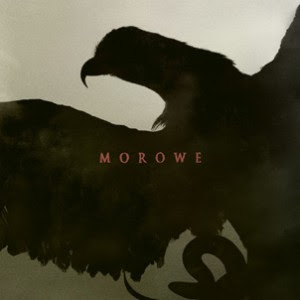 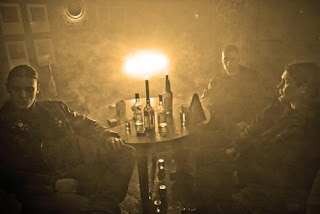 The Drugs Made Me Do It.

Morowe is a post-black metal band from Poland. This trio formed from members of groups like Massemord and Nuclear Vomit, both of which have little to no real elements in this band's sound. This debut takes a somewhat left turn to anything that the black metal scene has put out in Poland in a long time.
Starting things off with an intro, Wstęp, that sounds more like space rock than any sort of symphonic or shoegaze influenced metal, you can already tell that this record is going to try and separate itself from the pack. This is not the ordinary post-black metal record, bands that usually come to mind with that are projects associated with Neige (Amesoeurs, Alcest) or a band like Hypothermia, this is where far from where those bands typically associate themselves. This has a much more traditional black metal type of sound, but is a bit more angular and strangely melodic. There are parts on this record that are much more progressive sounding, with oddly layered vocals and strange guitar pattens and riffs, and at other times manages to bring bits of the "post" type of melody into a song.
The playing on here, as mentioned above, does not recall most of the stereotypes of the post-black metal genre. While the riffs on here are angular and odd, melodies do manage to carry the song from start to finish, even if there are some odd placed things going on. A track like Tylko Piekło, Labirynty I Diabły has everything mentioned above, it's melodic and oddly "progressive," but it also has some weird things that just happen to catch your ear, rather it be an odd keyboard melody in the background or a strange tapping riff near the middle of the song.
Things really start to hit a stride when Czas Trwanie Zatrzymać begins; from that point on, and really it was just the intro and first track before it, the band seem to just punch you out with their bizarre take on black metal, the pair of tracks, Jego Oblicza and Głęboko Pod Ziemią really just flow so well and take the bizarreness and harness it into a tolerable and tangible song. On the final real track, before the outro, Wężowa Korona, the band even manage to put their odd tendencies into a more rock'n'roll sort of song, similar to Satyricon, but not as straight or simplistic.
The vocals on this album are also strange for most of it, rarely going for a sound that could be called familiar. Vocals are not so easily distinguished between a scream or growl and singing, within the first real track on here, Komenda, the vocals appear to be layered with both screams and a baritone sort of crooning. The easiest comparison to another artist or band that contains a sound this different would be Ved Buens Ende.
Overall, this is a pretty cool record that shows a lot of potential, and definitely the willingness to experiment and take chances. It's safe to say that this is not the last that we will ever hear from this band. If you like black metal that is a little more left of center, check this out.
Overall Score: 8
Highlights: Czas Trwanie Zatrzymać, Głęboko Pod Ziemią, Wężowa Korona

Posted by maskofgojira at 6:04 AM