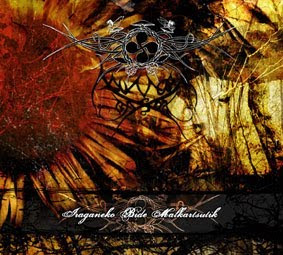 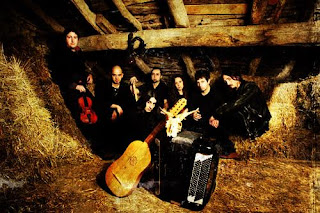 How Nice You Look Playing In That Field Of Yours.

Aiumeen Basoa is a pagan/folk metal band from Spain. This is the band's debut album after forming back in the mid 90s, their only release previous to this was a split back in 2001. This album has been praised by people like Dan Swano (Edge of Sanity, Nightingale) and Henri Sorvali (Moonsorrow, Fintroll).
This band does in fact use the much laughed at and made fun of attribute of folk metal in their sound, the overly upbeat melodies and use of acoustic instruments like violins, accordions, and flutes in case you weren't aware of the stereotype. Despite that there are also elements of black and progressive metal found on here as well. The blacked style is through much of the tremolo guitar riffs and screeching vocals, but the use of 70's keyboards really does give this band a different sort of sound. The song lengths on here also show that these are not just short catchy jingles about beer or vikings, 2/3's of this album are close to 10 minute long epics.
The fact that the playing on here actually is varied enough to keep your attention actually makes this album even more unique. The guitar playing, as stated in very much based in traditional black metal tremolo picking, but the band makes use of acoustic guitars that are pure folk and at other times are pure prog using long melodic guitar solos or sweeping bridges. Truly this is where the band is at their best, when they are either fully embracing the prog side of their sound or the folk, hear the almost sea-like opening of Akelarrearen Sua for an excellent example of the both sides of the band as well as a venture into a bit of jazz territory.
Throughout the album the band also make use of their several vocalists, creating a wide array of styles found within each track ranging from typical group chants to the aforementioned black metal screams to both male and female singing. Though none of the singing is in English, a lot of the clean singing is has a melody that's strong enough to get over that bump easily. If the vocals in this style aren't you're thing, a good half the album is mostly music rather than vocals anyway. Overall, this is a good example of folk metal done in a way that doesn't make it laughable and is actually respectably done in a non-cheesy way. Definitely one of the best folk metal records to be released this year. If you're a fan of folk, pagan/viking, or prog metal or rock, this is something you might want to check out.
Overall Score: 8
Highlights: Kantauriko Trabain Erruak, Akelarrearen Sua, Ekaitzaren Begitik

Posted by maskofgojira at 12:16 PM