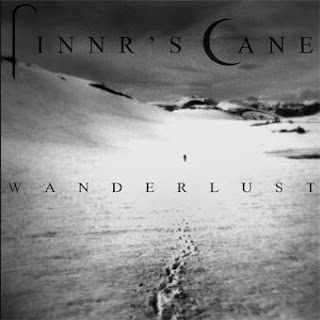 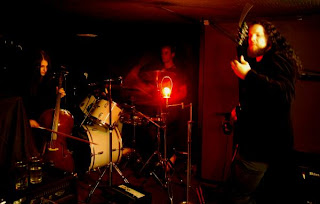 The Way They Look In Moonlight.

Finnr's Cane is a post/progressive black metal trio from Canada. This is the group's debut record and already shows signs of various influences that aren't so one dimensional. Despite being as unique as they are, other tags put on them include doom, atmospheric, and ambient.
Though this band is a three piece, they don't really have the typical sort of instrumentation of a trio. The triad includes The Bard (vocals, guitars), The Peasant (drums), and The Slave (keys, cello), the last one adding a unique sound to the low end side of the band. Instead of a low end rumble, you'll more often than not, get a very slow and almost mournful sort of lines that accompany the guitar rather than play underneath it.
The music on this album though is actually accented by the band's unique set of influences that range from bands like Ulver, Agalloch, and Drudkh to The Mahavishnu Orchestra. Most that are aware of and have heard these band all know that they all strive for some sort of atmosphere, the black metal band anyway, while I guess the biggest since of TMO appears in the slightly jazzy leanings that some riffs are played and that a good half, if probably a bit more, of this record is instrumental. A lot of this record does actually manage to play into the atmospheric and doom tags that have been put on the band, most of the tracks on here are slow and create a lot of open sounding ambiance.
A good portion of tracks on this album never really even move into the metal sound, remaining in an almost post-rock/metal sort of style. Clean guitars really dominate, whether it's in the sombre, almost post-rock of Glassice or the more progressive side of the band where cleans weave in and out with abrasive distortion on The Hope For Spring. Even when a track manages to maintain a constant distorted sound, it really never seems to lose that "post" vibe thanks to slow playing, haunting vocals and keys, Eternal.
The vocals that are on this record are farther back in the mix than one might think. The vocals themselves vary enough with a typical black metal scream while the cleans do tend to bring back memories of Ulver's early work or Garm's work within Borknagar, so it's more like chanting rather than singing, hear The Lost Traveller which contains vocals that are more noticeable. If you have a problem with vocals like this, this album probably is still worth hearing due to the vocals, once again, being in the background.
Overall, this is a very intriguing record that is definitely worthy of looking into further. While nothing on here is overly stunning or unique, it's getting there slowly. If you're into bands like the ones these guys take as influences, this is definitely worth listening to once or twice.
Overall Score: 7.5
Highlights: A Winter For Shut-Ins, Glassice, Eternal

Posted by maskofgojira at 9:42 AM