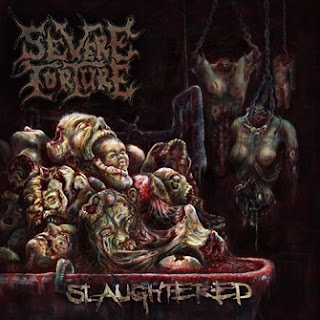 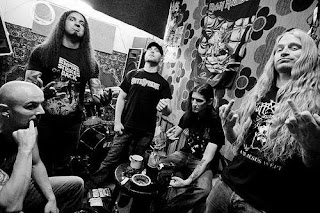 Severe Torture is a brutal death metal band from the Netherlands. This is the band's fifth full-length and continues with a bit more digestible sound found on their last album. Long time fans can still expect brutality and constant angry growls, as if you couldn't tell by the title and cover.
Anyone that is familiar with Severe Torture's back catalog knows how early records seemed to reference more of the brutal aspect utilizing extreme gurgles back then, where newer releases have begun to focus on a traditional sounding death metal sound. This album continues that, keeping things very much in the vein of early Cannibal Corpse, Morbid Angel, and Suffocation, but in the heydays of each of those bands. This album has melody, but only enough to keep you aware of where a song is and where a good guitar or vocal line is catchy.
The band manage to keep a good level of diversity within each song, obviously making them as brutal as they can, but making them melodic enough to at least be worthy of several repeats, as well as the occasional use of more technical playing, Feeding On Cadavers. The solos on here are well placed, though not in every track, when they do come up, hear Deride Jesus and Incarnation of Impurity, they are used to full effect. The band even decide to play some stuff that is a bit out left field for them, hear the clean guitars in Inferior Divinity or the slower and more groovy interlude of To Relieve Mortal Flesh of Pain.
Despite any one's love for gurgling and toilet bowl vocals, the vocals on here are low growls, rarely even going into a pure gurgle. The vocals are surprisingly understandable within certain contexts of a song, where, even if the lyrics don't particularly enthrall you, are clear and can be understood. Some may find it a bit hard to listen to the vocals due to most tracks featuring very little variety with them.
Overall, this is a good album that has a lot of consistency and great songs. These songs have plenty of great riffs and vocal lines that will supply any death metal fan amusement. If you're a fan of death metal, and any of it's various sub-genres, this is worth looking into and checking out.
Overall Score: 8
Highlights: Unholy Misconception, Feeding On Cadavers, Swallowing Decay

Posted by maskofgojira at 11:48 AM