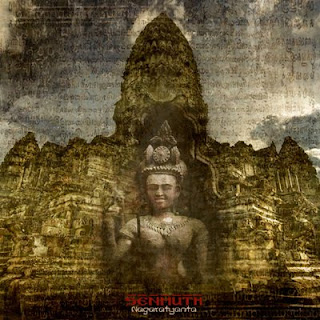 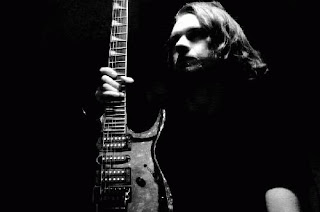 Senmuth's release for June is this album entitled "Nagaratyanta." Continuing with his recent albums style of ethno-ambient stylings, this is a bit more abstract than previous ones. This album appears to be taking a bit more of a progressive influence, as showcased from the tracks on here.
This album's sound features his trademark ethno-ambient stylings but the tracks on here are much longer than on previous albums. Half of the tracks on here clock in at over 10 minutes, while most of the others are over 5 minutes. The tracks develop into more full sounding soundscapes while a track progresses. The influences of other styles Senmuth has done also manage to seep into this album, including a bit of metal and industrial, so this does differ from his more straight ambient styled work.
For fans of Senmuth's recent ambient streak, this album will surely be one for you to hear, as this album is almost an hour and a half long. The length is not actually that big of a problem for this album, as most tracks tend to not feel as long as they actually are. There is plenty of experimentation within any given track to keep someone entertained for an entire song. Another thing that surprised me was the use of repeating parts on this album, whether it was just made more obvious on here than on other records or if it was intentional, it gave the songs a bit more structure and gave the opportunity to hear a chorus of sorts within certain tracks.
This album explores a lot more Indian styled sounds rather than the usual Egyptian ones, as if you couldn't tell by the cover. The melodies placed within the songs on here definitely show a leaning towards more of an Indian sort of sound, which might sound a little odd upon first inspection. Due to the influence of this culture on this album, there are some more experimental elements scattered throughout the album, including female chants, odd techno-esque beats, and Arabian woodwind instruments and rhythms.
Overall, this is another decent release from Senmuth. This one might appeal to those that like some more variety with his work, as opposed to singular styles. If you're a fan of ethno-ambient that contains some heavier moments, check this out.
Overall Score: 7
Highlights: Nataraja Bayon, Khmerian Naagarataa
Posted by maskofgojira at 12:43 PM