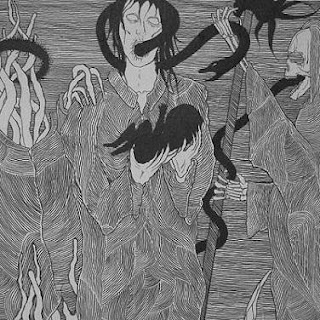 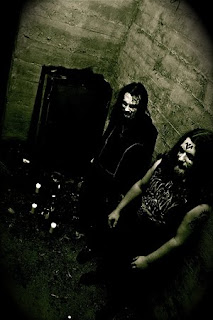 Staring Straight Into The Abyss.

Dødsengel is a black metal project from Norway. This is the duo's second full-length release, following up last years acclaimed "Visionary." This new album delves even further into occult and anticreationist ideals.
The sound on here sounds exactly like the lyrics reference, anticreation and occult. This is very pure sounding, in a manner than it is not overly produced or intricate, it sounds raw and passionate. This may turn off fans of metal that is a bit easier to "hear," but the rawness adds that extra quality of occult that makes it feel real and unfiltered in comparison.
Musically, this band, as already stated, feels very unfiltered and raw sounding compared to many bands, even black metal bands for that matter, but it's not Darkthrone raw. This is a black metal record that is very true to that sound, kvlt for anyone that needs confirmation, but has enough melodic and psychedelic edge to keep you listening and on your toes. It's not progressive enough to be put in the same league of bands like Nachtmystium or Ihsahn nor as melodic as bands like Watain and Dissection, this is probably the crossroads of Shining and Mayhem, the album center-piece, Alor Mal Ki perfectly demonstrates this balance as well as enough atmosphere to put the entire track in a bit of a haze.
This is also, for those that might have this idea, a record that just blazes full-throttle ahead. There are plenty of moments on here where the music is slower, and this is probably when the band is weirdest, hear Lucifer Ascendant, and things get trippy almost. A lot of this record goes up and down in terms of speed and atmosphere, really going full on blast-beats at some points and quiet paranoia at others.
Vocally, Kark manage to pull off quite a lot in each of these songs. His voice goes up and down, ranging from deranged, suicidal-like yells to black metal screams to death metal growls. The vocals might seem a bit strange at times, good heavens if at some points in Azonei Wyrdwalker they don't seems out right disturbing. This is one of the few times I can say that if you read the lyrics with the music, the atmosphere that is created by the music actually fits nearly perfectly with the lyrics themselves.
Overall, this is a great record that seems to become more and more revealing with every listen. Perfectly encapsulating the sound of modern, underground black metal at it's finest. If you want something that is raw for the sake of pure emotion and atmosphere this is worth checking out.
Overall Score: 8.5
Highlights: Evocation of Amezarak, Lucifer Ascendant

Posted by maskofgojira at 11:34 AM