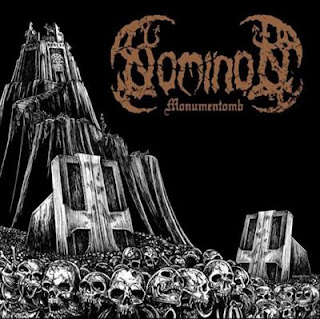 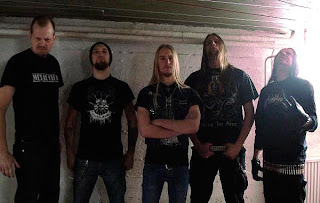 Nominon are a death metal band from Sweden. While the band have released albums in a steady fashion since 2005 with two full-lengths as well as several EPs and splits despite suffering numerous line-up changes. This album in respect to the line-up is similar to an EP released last year.
First off, the sound of Nominon, for those that don't know, is fairly old-school death metal played in the style of American groups like Obituary and Cannibal Corpse, but could also draw a comparison to early Entombed as well. The songs have enough to keep you listening but stick to a very brutal sort of format where it's crusty and unpolished sounding, no frills to be found. This is not an album for people that are looking for soaring melodic hooks, progressive twists and turns, or doom based dirge-like riffs, this is straight ahead death metal played in the way of it's originators.
Though this is done with very little use of extra effects or stylistic altercations, this album is still an entertaining listen. Tracks like Mountain of Hate and Worm feature extremely catchy vocal lines that grab your attention by the throat. The musicianship does not over complicate the riffs on this record, often being just passable enough to keep your attention.
What was mentioned above though, when it comes to the "Omen" EP that preceded this full-length, is that this album too features no official lead vocalist. The main vocalist that is on more than half the tracks on here is a man named Erik Sahlstrom whose style is very sloppy sort of style that is reminiscent of Martin van Drunen (Hail of Bullets, Asphyx). Tore Stjerna (Nex, In Aeternum) contributes lead vocals on Undead Beast, providing an almost black metal style which is very throat-wrenching. Johan "Barsk" Thornberg provides lead vocals on the final track, Wrath of Shiva, which are the most guttural on the album, being noticeably lower than the previous vocalists.
Overall, this is a decent release that does provide a death metal fan some new anthems. Depending on your personal view on the band using several vocalists instead of just one probably won't harm your opinion on this record too much. If you're a fan of death metal done the old-school way, this is where you want to be.
Overall Score: 6
Highlights: Undead Beast, Omen, Wrath of Shiva

Posted by maskofgojira at 10:28 AM