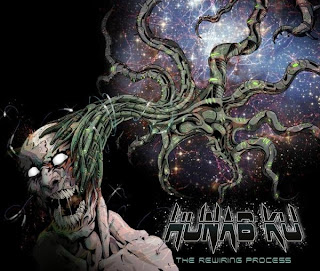 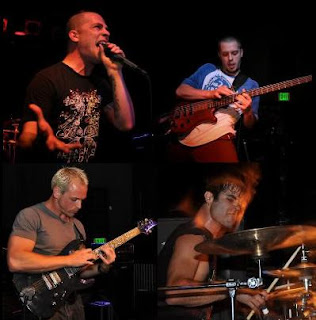 Don't Think This Through.

Hunab Ku are an avant-garde mathcore band from Washington. This is the follow-up to their 2007 debut full-length album and is the first to feature new lead guitarist, Luke Jaeger (Sleep Terror). This EP really does showcase a more focused sound for the band while keeping their trademark weirdness.
The 4 tracks on this album take the band's sound to another level. Anyone that had heard the band's full-length debut, "The Gaze Inward," was aware that it mixed elements of electronic and grindcore together with bits of avant-garde, this EP takes the avant-garde, increases the weirdness, and then turns the rest into a form of death metal. Remarks about the sound of this EP have generally included that this is what would The Dillinger Escape Plan would have sounded like if Mike Patton had stayed with them.
The music is very spastic, switching between grinding death metal, melodic Mike Patton-style vocals, and jazzy interludes. One won't find anything simplistic on here, often bridging the gap between DEP's sonic spastic style, Mr. Bungle's weird ventures into unknown territories of music, and Necrophagist's advanced technical abilities. Fans of music that moves like it has 7 different heads will find this to be entertaining as well as enjoyable.
Overall, this is a very odd album, but demonstrates that the band is moving forward with their sound. While this is extremely difficult to listen to and make sense out of it is much more tangible and unique than their debut. If you're a fan of extremely technical music, this is something you should check out.
Overall Score: 6.5
Highlights: Eat Your Young, Circling The Drain

Posted by maskofgojira at 6:21 AM