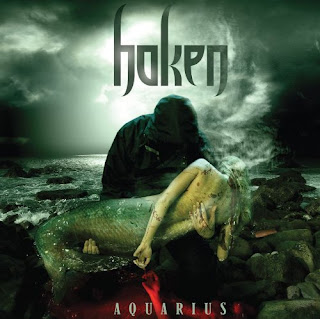 Haken is a progressive metal band from England. The band has become known for their guitarists being members progressive metal bands To-Mera and Linear Sphere. This is the groups full-length debut album as well.
The sound of Haken is anything but a conventional prog metal sound, sure you have elements of Dream Theater and Fates Warning in there, but also so much more. The band originally started as more of a traditional sounding progressive rock band but have evolved into more of a metal sound that still manages to hold true to the rock side as well. There are definitely some moments on here that scream bands like Genesis and Yes, but besides that, there are moments that feel like some of the quirky things you'd hear from Pain of Salvation or one of Mike Patton's projects. But like a good number of prog bands, there is plenty of each player showing off.
Each player is very varied on here as well, not just the vocals. Instrumentally, the playing can go from traditional prog noodling to Meshuggah groovy stuff to odd Mr. Bungle-esque carnival kind of melodies within the same minute. The transitions from one style to another do have to be mentioned because these guys can pull it off so well, hear the Spock's Beard gone Sonata Arctica on Aquarium. The vocals have a solid grasp of what they can do as well, going from an almost Neal Morse singing stuff to death growls, though those aren't used a whole lot on here, to more Daniel Gildenlöw (Pain of Salvation) emotive kind of vocalizations. Pretty much, if you want it, chances are it's on here somewhere.
Four of the seven tracks on this album are over ten minutes long, that should give you an idea of how much goes on within a given track. The fact that there is so much going on within just one track, and the band actually pull them all off well, makes you look at all the bands copying Dream Theater and wonder how why they all don't sound as original as these guys do. When you can have an almost power-ballad-ish type of song, Eternal Rain, followed up by possibly the heaviest track on the album, Drowning In The Flood, and make them both sound good and original, you know you've got a band that's doing something right. Even the album closer, the 17 minute Celestial Elixir, pulls together everything from spacey Pink Floyd tinged parts to heavy Dream Theater moments fantastically while never really sounding like one band in particular.
Overall, this is a fantastic debut album that has a lot for everyone to enjoy. There will be at least one thing on here that will make you want to listen to it once. If you like progressive music, check this out.
Overall Score: 9
Highlights: Streams, Sun, Celestial Elixir

Posted by maskofgojira at 11:32 AM