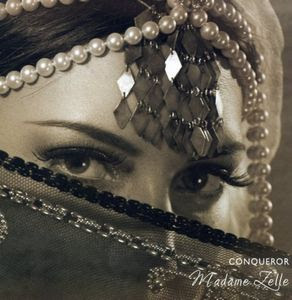 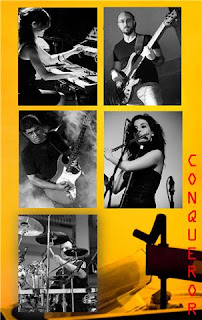 Conqueror is a progressive rock group from Italy. Though the band formed back in the early 90s, they were not able to release their debut until 2003 due to line-up changes. This is ultimately their fourth album and is their first full-on concept record.
Though being very proggy, the real style of Conqueror's sound is more jazz fusion of the late 60s and 70s. There is a heavy use of keyboard and synthesizer throughout the album, bringing in a lot of that retro vibe. The use of both a mellotron and more modern synthe sounds does provide a bit more variety for those that tire of the mellotron. The few times that a piano does come into a song, it is usually the highlight of where it is, such as in the climax of the album closer, Ad Occhi Alti.
The guitars are not as up front as a lot of other bands, remaining farther back with the bass. Despite the more synthe heavy sound, the guitar playing is executed very well, not really overplaying or underplaying, but allowing the bass, vocals, and keys to have a more up front role in the sound. There are more than a few times when the guitar does come up for a breath of air, so to speak, and has it's moment of maybe stretching it's musical muscles beyond a more simplistic backing sort of role, hear tracks like Indonesia or heavy riffs that come up in Fascino Proibito.
Besides the guitars, synthe, bass, and drums, the use of both flutes and saxophones are used as well. Within ever building instrumental sections they will emerge from a haze and illuminate and capture everything else behind it and take center stage. The flute in particular manages to create lead melodies for several tracks. Though the sax is beautifully played, both on here and on other albums, it unfortunately does not hold the same sort of melodic sense that the flute holds.
What really made this album such an interesting listen is that more often than not within almost every song on here, the band get about half way or so into a somewhat structured piece of music, then just go off onto a musical tangent. I know what most people reading this are probably thinking right now, isn't that what progressive rock, metal, whatever does anyway, the answer is yes, I do realize that, but the way the band can go from an almost ballad type of song into a pure and almost jam band vibe is still entertaining, H 21. The movements from more simplistic sythe melodies and rhythmic patterns into more jazzy and psychedelic passages are just fantastic, really adding meat to simple beans and potatoes, if you catch my drift.
Overall, this is a really great jazz rock album that contains almost everything a fan of the genre could want in an album. Full of melodic vocals, that never stay around too long, they weren't really anything worth mentioning, and fantastic playing on all ends. If you're a fan of 70's rock, jazz, fusion, the like, or are into it of any era really, this is definitely where you want your ears to be.
Overall Score: 8.5
Highlights: Margaretha, Fascino Proibito, Da Sola
Posted by maskofgojira at 11:13 AM