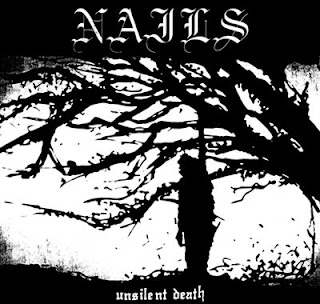 The Road To Grind Is Fast And Loud.

Nails is a grindcore/d-beat trio from South Carolina. Their sound is described as Entombed covering Napalm Death and Drop Dead, as well as early Earache Records influenced. Another factor to add into this is that it was produced by Converge's own Kurt Ballou.
You will receive no mercy while listening to this record, the opener, Conform, is just over 30 seconds and punches you in the face. About half the tracks on this album are actually under a minute long, and it's great. Fast, aggressive, raw, punching, and catchy, this whole record is under 15 minutes but manages to give you more than most hour long record manage to do. But just because a lot of songs are short doesn't mean the longer ones don't give you any less than the absolute best. Tracks like the title-track, Unsilent Death, and the closer, Depths, manage to create more groovy riffs to bang your head along to.
Tracks that manage to get longer than a minute usually contain a breakdown, and before you run, these things are great. The breakdowns on tracks like Suffering Soul and I Will Not Follow are just crusty as anything you can think of and they're just so damn catchy and groovy. The term may scare people due to it's oversaturation in metalcore and deathcore, but here it's just more brutal than any of those bands could ever really make them.
Overall, this is a great record, one of the best grind records I've heard all year. This thing is so dirty and crusty it's just fantastic, plus it's short enough so tracks are guaranteed to never overstay their welcome. If you like your music fast, aggressive, and catchy, this is where you need to be.
Overall Score: 9
Highlights: Scum Will Rise, Unsilent Death, No Servant

Here's another review from one of my bro's on Youtube: JCGSound.

Posted by maskofgojira at 12:59 AM