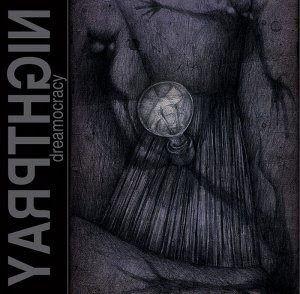 Currently Listening To A Dream Theater.

Nightpray is an avant-garde/symphonic black metal band from Romania. The project band was originally formed back in 2002 as the project Subway Night Orchestra. After several releases from that project and a short EP under the title of Nightpay in 2006, a real band was formed and released a debut full-length early in 2008.
After a short intro track, Lights Out, the band proceed to move into an equally dark and ominous sounding track, Stars On The Run. This track doesn't sum up the entire album, but serves as an almost precursor to what is to come. Since the band began as a project that did produce soundtracks for graphic exhibitions, the sound of this record is obviously going to have a much different sort of vibe to it than if it was a metal band coming to a more ambient sound. The songs on here most certainly contain a black metal sound, but it flirts so much with symphonic, real orchestral music, not the background or epic sounding style, shoegaze, and post-rock.
The sound, from a metal stand point, on this record is very different from a typical black metal sound. Riffs on here do carry that same sort of atmosphere that the genre intended, but besides the occasional tremolo riff and harmony, the riffs are much more angular and progressive sounding. The melodies are also a bit more left of center, not being the clearest to put together but are quite catchy, hear the one in the track Falling, which is strangely melodic but extremely odd sounding.
Songs on here range from pure strange, mainly the interlude, Intermission. Learning to Feel Less, and the intro to melodically pleasing and unique, Shadow's Apartment, and everything in between. The dissonance within some tracks counterpoints the ones that are much more harmonious and melodic and that, ultimately, is what makes this album so different from others within it's genre. Within every odd instrumental, there must also be an equally odd voice to accompany it, and in this case, the odd voice is just that odd, ranging from the sound commonly associated with the depressive scene to almost nonsensical ramblings, Eulogy In Croak Flat.
Overall, this is an obscure, avant-garde, post-progressive, black metal album that is just weird. Comparisons could be made to the avant-garde side of symphonic black metal like Pensées Nocturnes or Dødkvlt, but there is plenty of Solefald and Fluerty in here as well. Totally left of center, if you're into that kind of bizarreness, check this album out.
Overall Score: 8
Highlights: September Highways, The Long Distance Passenger's Anthem, How Many Days, How Many Fairytales

Posted by maskofgojira at 7:32 AM