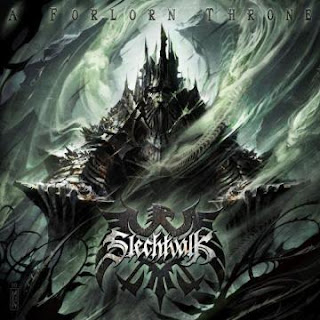 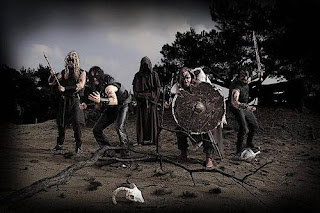 The Vikings Are Back For God.
Slechtvalk is a melodic black metal band from the Netherlands. After nearly 5 years of silence, the band has released their follow-up the acclaimed "At The Dawn of War." Some have pushed the band away as a bit of a novelty due to the members being Christian, but these guys have managed to make some of the catchiest melodic black metal out there.
First of all, let it be made clear that the fact that the members of this band are Christian has no impact on the music or lyrics. This band play a fairly straightforward brand of melodic black metal with some hints of viking/pagan metal and symphonic black metal as well. The lyrics focus more on vikings and war more than Christianity or really any sort of religion.
Most songs on here are fast, brutal, and melodic enough to keep your attention through an entire track without wandering, and the only reason I bring the matter of time up is that there are several tracks that are around and top 8 minutes. A lot of these songs take a fairly standard approach towards the style that has been mastered by groups like Dissection, Naglfar, and Thyrfing. Your music is fairly straightforward sounding without a lot of deviation from a set structure, but what makes this band stick out is the band's songwriting abilities. There are a handful of tracks on here that don't really measure up to snuff, but the rest are solid at their worst. There are a few times when a song tends to lean a bit more into one of their influences or sub-genre, Divided By Malice is a bit more viking sounding and really recalls a bit of early Borknagar, while Allegiance seems to take a more rock sort of influence with a more groovy sound for about half of the song before going into an almost prog type of thing.
What one might notice upon researching, or at the very least listening to a song, is that they have a variety of vocals, three different members perform vocals on the albums and live. The main member and founder of the band Shamgar performs guitars and black metal screams, Ohtar performs guitars, grunts, and clean vocals, and finally Grimbold performs drums and growls. This allows for a large range of possibilities, vocally anyway.
Overall, this is a decent record that has a handful of songs that are fantastic. Though this album doesn't quite measure up to their last one, it's still very good and solid melodic black metal. If you're into the genre, this is definitely worth checking this out.
Overall Score: 7.5
Highlights: Forsaken, Allegiance, Towards The Dawn
Posted by maskofgojira at 10:21 AM