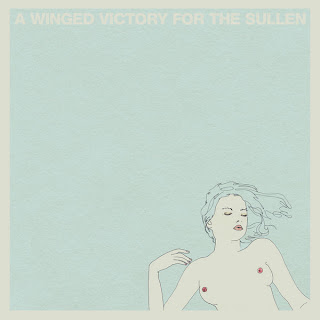 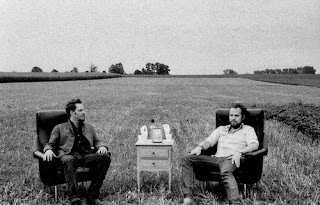 This year I've found some really good drone and ambient records, which have subsequently not been reviewed, but none the less been living with me. This is a collaboration between Stars of the Lid member Adam Wiltzie and Dustin O’Halloran. Last year Ólafur Arnalds gave me one of my favorite records of that year, I was curious if these two would perform similarly.
Whether or not it comes as a surprise to you or not, I am a fan of classical and orchestral music and an even bigger fan of piano based music. This album, which focuses on the piano and other ambiances created around it is the type of stuff I absolutely love to hear. In addition to that, the somber atmospheres on here accompanied with strings turns out to be some of the most moving musical effects out there for me. I know it sounds odd coming from someone who listens to as much dark and heavy music as I do but I find music that is perhaps softer and more simplistic to often contain even more emotional depth than a lot of metal records for example. Now, this album varies a lot in song lengths, ranging from one to twelve minutes, but one thing remains the same throughout, they are all good. It's consistent from one track to the next, which is good for a record like this, which remains engaging with it's listener, me in this case, for it's entire length.
This is a very cold and dark record, there isn't a whole lot of light, but there is beauty. In my head, while I was listening to this, I just pictured arctic landscapes at different points in the day. With a track like the opener, We Played Some Open Chords and Rejoiced, For The Earth Had Circled The Sun Yet Again, bringing to mind the sun rising over the barren and icy landscapes of the arctic while Steep Hills of Vicodin Tearstrack feels much closer to the sun setting and I just picture the cold ocean below the ice-caps and the life underneath the water. In a sense, this does recalls a bit of that post-rock vibe that Ólafur Arnalds gave with his last album, but this album is not nearly as repetitive and minimal as that one was. If there's a flaw to be found on here it would have to be that these tracks can blend together at times, which isn't necessarily a negative depending on who you are, but I kind of wished that each track was a little more separate from the others.
This record blew me away, it's the type of music that just struck me as the perfect soundtrack to a rainy day, which it happens to be while I was writing this. Like I said above, I'm a big fan of this sort of stuff, I love ambient based piano music and this is totally up my alley. Definitely check it out if you're into piano based music, somber orchestral music, ambient, or even post-rock, I think you'd be able to get a lot from this record.
Overall Score: 8
Highlights: Minuet For A Cheap Piano, A Symphony Pathetique, All Farewells Are Sudden
Posted by maskofgojira at 9:47 AM