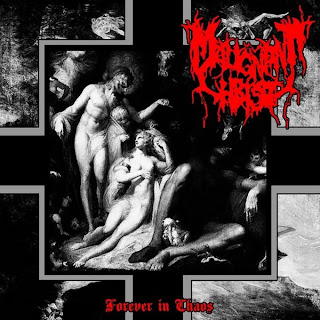 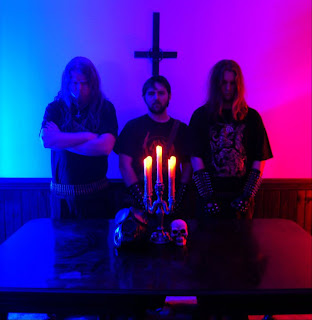 For me, notice I'm only referring to myself here, I don't hear/listen to a lot of bands that come out from Tennessee, let alone extreme metal bands. I mean, based on the cover I could kind of guess what kind of sound these guys would have, but that doesn't really matter in terms of how their home has shaped their sound, like some bands. I was actually quite intrigued, before hand, as to what these guys would do with extreme metal.
This is an odd one for me because I've never heard of the band before, which is fine, usually a good thing actually, but after listening to it a couple of times through, it's still a little weird. This is a death metal album, stylistically, the vocals are guttural and low, the guitars are tuned really low, and the drumming relys on a lot of blast-beats. But what's weird about this is how much of a debt it owes to bands like Portal or Impetuous Ritual in terms of how this record actually comes out sounding. This is very atmospheric and the guitars are really, and I mean really, muddy sounding. The whole thing, the guitars and atmospherics kind of blend together into this really dense sort of low-end distortion that can make making out riffs a little difficult at times. As I said, the drums rely heavily on blast-beats, to the extent that I read someone say that it kind of referenced the brutal end of the death metal sub-genre, which I could certainly agree with, not only in term so playing but also the tinny sound of them as well.
In all honesty, this thing can be a real bitch to listen to if only because of how how it was mixed. If you picture it as a latter, for example, the guitars and bass are way on top with the vocals, which in all honesty are pretty low and are near indecipherable, if lyrics matter a lot to you, you're gonna need a lyric sheet for this one, and the drums are near the bottom, very loud and clear sounding in comparison. I found it a lot easier to get into a song if the drums broke out of a blast-beat every once in a while, because the guitars wind up sounding like mud for the better part of the album, so it's hard to really say they're coming up with anything memorable. I don't consider this to hurt the album too much, after having listened to it a handful of times, but when I first listened to this, I'll be honest and say I hated it for production and mixing reasons alone. Just to give props on them for something, it wasn't until track five, Mutilation Ritual, that I actually heard the drums as a drum-machine, which I have to say, usually it's quite easy to make out, but these guys did a good job of keeping things in the realms of possibility on here, as well as not making it really, really annoying. In terms of songwriting though, I think it's about average for a band like this, you find little riffs or drum patterns that catch your ear, but it's still pretty naive compared to a lot of other groups.
I don't ask for much, but I would love it if the band would take a little bit of a cleaner route to recording their guitars on the next album so I could make out what the low-end it actually doing most of the time. Besides that, check this out if you like really atmospheric death metal.
Overall Score: 7
Highlights: Escape The Torment, Mutilation Ritual, Torches of Sodomy
Posted by maskofgojira at 7:51 AM