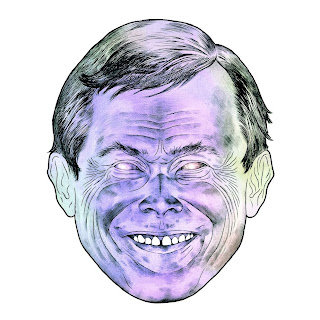 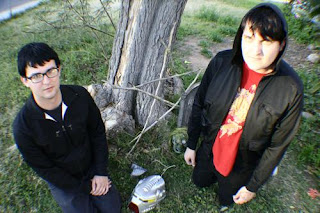 Right here we have another piece of interesting sound from the likes of Mind Flare Media. After listening to that Cheezface release earlier this year, which I was pretty luke-warm on, I could have only guessed what kind of noise this was going to be. Though, like I just stated, I did imagine it was some sort of noise.
Now, the first time I listened through this, I was quite shocked, because this was a lot better than what I had expected. I never much cared for the whole porno-grind aesthetic of some of these power-electronic groups and projects and luckily, this album makes almost no reference to those cheesy, stupid, and rather annoying sounds. Instead, what you get is a much more organized and interesting mix of noise, grindcore, electronic and industrial music, and at times even punk. I was quite entranced because the mixture, despite sounding rather random and unorthodox, actually managed to be pulled off convincingly for the better part of this album. A lot of these songs are short and thus manage to retain a high level of intensity consistently without loosing much steam along the way, which is something I don't really bring up all that often in these reviews, but I think it's important to say that even when these guys go full bore into noise, they're only in shorter bursts that are usually intermingling with more electronic sounds and beats.
This is just one of those albums that is going to make you rethink what noise rock technically is and can be. The genre of noise rock is pretty defined in this day and age, with some groups going out and exploring other territories, but I don't think I've heard anything as strange and bizarre as this coming from a noise rock sort of territory. I'll admit that a lot of these tracks do blur the lines between being "rock" based and electronic noise, but tracks like Altered Beatststs and A Year On The Toilet really bolster some interesting rhythms that just stuck with me as soon as I heard them. The distortion that is used on here just makes it sound very uncomfortable and uneasy, I don't think there's an instrument on here that isn't distorted in some way actually.
It's a very interesting album from a young group that has a lot of potential. This album is pretty broad, sonically, which could see them moving into any number of directions in the future, and I look forward to hearing them. Definitely check this out if you'd be interested in hearing noise rock go into electronic and noise, real noise, territory.
Overall Score: 8
Highlights: Shining Figures, Altered Beatststs, Xzrzrz
Posted by maskofgojira at 11:07 AM