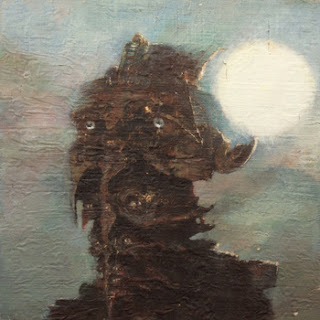 Who could resist a cover that looks like that? In all honesty, this cover, despite knowing it was more of a black metal album, looks more like an old-school death metal album. Beyond that, I remember, months ago, seeing the cover of this on Metal Achieves and just thinking, "I have to hear this."
Now, what I came in expecting from this was not what I got at all. When I hear the term "experimental black metal," at least I assume that the band in question is going to have quite a bit of black metal. What's on here is a band that plays a lot with thick and heavy atmosphere, doomy riffs, and raw guitar tones but somehow it all just meshes together. It's the type of sound where it doesn't seem like it would all come together well, dense atmospheres and pretty raw instrumentation anyway, but when they blend on here, it creates a very interesting and unique sort of cacophony that is unlike that of another group. For some reason, groups like Portal, Type O Negative, and Leviathan all came to mind when I listened to this, even though comparisons to them are all minimal at best. I know that those bands are all pretty different from each other, but those are just some of the ones that came to mind, for some reason or another. This thing is not an album that makes it easy for you to digest, it's a tough pill to swallow. It took me a few listens to kind of get used to the atmosphere and then I could fully appreciate what this album was going for.
If you can get through all that fog of atmosphere, you'll actually find some really good riffs on here. The riffing is pretty melodic, more so than I anticipated and is always doing something interesting, whether it be shifting from more straightforward black metal tremolo picking into a doom riff or a more crusty, near thrash, death metal riff. The vocals on here have that old death/black metal vibe to them where he sounds almost rabid in his delivery. All of the songs on here are constructed and arranged very differently and almost abstract in a way, like the feedback during Meandering Through The Tunnel of Trance, it's weird but it doesn't feel out of place at all. One could make an argument for which genre really takes precedence over another in here, but at least for me, black, death and doom metal all work together on here pretty equally, melding together without one really dominating another.
Like I said above, this album is a grower, it reveals itself more and more with each listen, so don't come into this expecting it to just come out and give you everything on first listen. I know that this isn't going to be for everyone, but it is the type of record that definitely provides plenty of benefits for those that stick around with it. I definitely recommend you check this out if you like extreme metal with a lot of atmosphere.
Overall Score: 8.5
Highlights: Shining Toxic, Among Us, With Words Like Ecstasy
Posted by maskofgojira at 8:54 AM