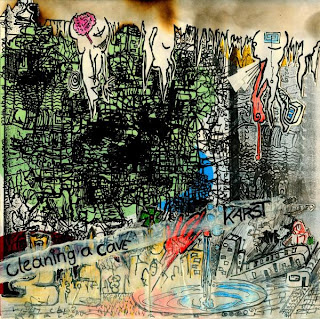 I rarely see a cover, in metal, let alone black metal, that looks like this, being a lot more common with the post-hardcore scene. So, once again, this was a case of me being interested in the cover before anything else. I'm hopeful that this band is interesting, because a lot of bands from Eastern Europe rarely are interesting, to me.
From the onset, this record made it known that it would not be another black metal record. It's rare that a black metal album of any kind opens with a funk-esque bass-line, if it's even been done at all. That isn't to say that this is a blackened funk metal album just because it makes use of very clean and distinct bass-lines, this band takes their sound into multiple territories including straight ahead black metal. The use of post-rock, funk, jazz, screamo, and, to an extent, noise rock really shape the album into something rather unique, as one track never really sticks to one sound, usually shifting into another style about halfway through without much regard to traditions. Granted, all of their transitions are done very well, it's not like a haphazard style-shift, it was very fluid throughout.
It's interesting because for the entire length of this album, I really wanted to enjoy it more than I was. I really felt like the ideas, the songwriting, and the performances were all there, but there was just something keeping me from loving this like I've loved other records with a similar sort of genre-bending concept. I think what's keeping me from loving this is the more black metal sections, honestly. While they're well done, as I said above, sometimes they feel a bit average and uninspired, nothing new or all that interesting happening during some of the sections involving them. Now, none of these songs are really bad, I have preference towards some of the ladder tracks like Közös and Etlen, but none of them are bad at all, in fact, a lot of them are good. It just seemed to me that when the band was performing a more jazzy section or went into an almost rock part, they seemed to be playing a lot more interesting riffs that went into weird directions. A track like Jövõ is just a lot more creative and distinctive than a track like Kettõs in my opinion, and that's ultimately what kept me from loving this record.
This is an interesting record that, to me, is just missing a bit more ingenuity to move it up to the next level. Keep in mind, I still enjoyed this record, but there was just something about it that kind of stopped me from loving it. I definitely recommend people checking this out if they like more experimental black metal.
Overall Score: 8
Highlights: Megbomlott, Közös, Bead A Part
Posted by maskofgojira at 8:16 AM