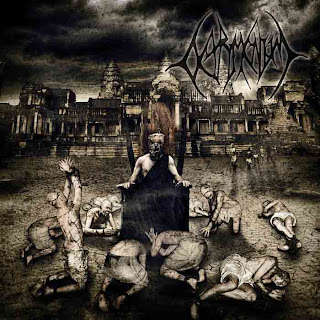 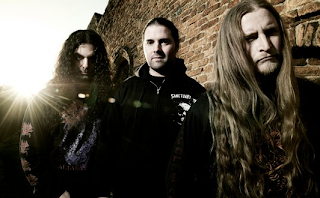 Detrimentum was a band that I found out about, originally, through a short article in a magazine that intrigued me. Now I'm not a huge fan of the whole brutal death metal scene, obviously since it's not reviewed that often on here, but their debut full-length was one of the few that I kept with me. Since that release, the band has gone through multiple line-up changes and has wound up as a trio for this album, resulting in a different sound.
Immediately from the opening of The Crimson Legacy it's apparent that the band's sound has shifted. On their previous album, they were more closely associated with the brutal death metal genre, this album makes use of a lot more melody and traditional death metal sounding riffs. I know that this might shock and turn off quite a few of their fans who liked the band for their brutality, but this album does demonstrate a lot more expansion in terms of stylistically. Probably the biggest shift from their previous album to now, and on the demo released in between the two, would have to be the vocals. Vocally, the band's early material was shaped by extremely guttural growls and near inhuman sounding pig-squeals where on here, the band take a more traditional death growl as their vocal style of choice with occasional clean vocals. That's right, clean vocals.
The use of cleaner guitar passages throughout the album will most likely cause a bit of a stir among those fans who love all brutal, all the time because there isn't a constant double-bass blast or pig-squealing vocals, but they actually enhance these songs. To be honest, Ascension, in my opinion anyway, sounds like one of the most chaotic tracks the band has produced thus far. In fact, I'm sure that a good chunk of the band's original fanbase started within the more underground brutal death metal scene, so the shift towards what could be considered a more traditional sounding death metal sound, the influence from groups like Death and Bolt Thrower show up now and then throughout, might piss some people off. Change isn't always welcome in metal circles, even if it's for the better. The melodies that are present throughout are solid and definitely recall more of the traditional sense of melodic death metal, at it's best, none of that modern melo-death stylings, and the same applies to when they go off on a more technical tangent, The Journeyman's Lament for example, these are tastefully crafted and show attention to songwriting rather than instrumental prowess.
It's a well crafted album that definitely shows attention toward songs over other elements, which brought forth more diversity. Like I've said multiple times throughout the course of the review, I'm sure some of the band's audience will most likely show distaste for above reasons, but I do believe that this album will appeal to so many more. Definitely check this record out if you like more diverse sounding death metal.
Overall Score: 8.5
Highlights: Pestilence Shared With The Worms, Effigies of The Silent Kings, Dominus Detrimentum
Posted by maskofgojira at 9:12 AM