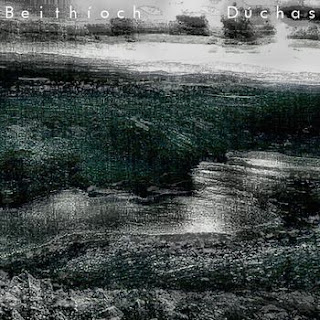 When I look at the major areas in where a lot of black metal bands come from, I don't see a lot of them coming from Ireland. Sure, I can name a few off the top of my head, but I think it was that that made me want to check this out, because the few Irish groups I do have definitely stand apart from other groups. Apart from seeing where this band is from, I knew nothing about it upon first seeing it.
Upon further research into the band, I found out that this was an instrumental release. This surprised me because upon finding this out, I kind of associated this with the whole depressive/suicidal/blackgaze scenes. Anyone who's made that sort of rash decisions upon not even hearing a band once usually falls flat on their face due to their preconceived idea not being anywhere close to the mark, as was the case with me on this record. Instead of lo-fi blackgaze-meets-dsbm, I got a doomy black metal album with no vocals. But even within that description, this album has a lot of breathing room and decidedly makes the most out of that room to channel multiple different influences.
With no vocals to intrude on the instrumentals, this does become a bit duller to be honest. I feel that some of these tracks could have used a vocalist to kind of reign in some of these ideas, or at least someone to focus them a bit more. The diversions from droning dark ambient pieces to more doom and black metal isn't anything new, but it doesn't feel like a natural progression from one to the next. Tracks like Pocaira Gaoithe or Anfa are great black metal tracks that have just the right amount of progressive influenced riffing to kind of stand apart from other groups, but the ambient pieces like Aisling Na Marbh just end up feeling dull and listless. I feel that Déithe Na Talún is definitely the mid-point for the album, in terms of quality, because some of the ideas used in the track really work, while others fall short.
Is this a great album, in my opinion, no, unfortunately it still has a lot of potholes in the songwriting department. I could see this band definitely growing into something different in the future, but for now, it still sounds way too unsure of what's it's trying to do. Check it out if you like more experimental black metal though.
Overall Score: 6
Highlights: Pocaire Gaoithe, Anfa, Déithe Na Talún
Posted by maskofgojira at 10:44 AM