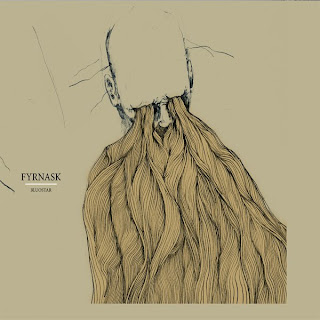 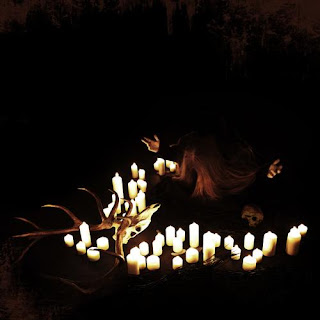 A lot of black metal bands, nowadays more so than before, seem to describe their records or their live shows as rituals. I'm sure I'm not to only one to disregard this sort of idea as nothing but a person's overblown ego and perception of their music, but there are a few groups that do live up to that. This drew a comparison to one of the few artists that I believe does do that so I became interested.
The group I'm referring to above happens to be Echtra, a band more often than not associated with the whole Cascadian black metal scene. Now, normally, I don't put a whole lot of stock into what a label releases, with a few exceptions, because they tend to vary in terms of quality, style, and my own personal preference to an individual release, but this was just one of those things where the cover caught my eye and I looked into it before listening to it. But to kind of return to the whole ritual idea, this, like I've found with the work Echtra has done, actually manage to accomplish sounding like a band attempting to summon something greater than themselves during a performance. The shifts and variations in style throughout the disc made it have an ebb and flow type of vibe, where you'd get more ambient and droning sections that were very sparse and dark, but then you'd get more intense black metal parts that ranged from traditional sounding aggression to more melodic breaks. The entire album manages to accomplish sounding like a consecutive piece, only adding to the ritualistic feel for the album which is probably it's greatest strength as well as it's greatest weakness.
If you could truly call the natural fluidity of the album a weakness it's only because due to that, and this is bound to happen in an album like this where there aren't so much songs as much as sections that stand out. Sure, the droning conclusion of Ein Eld I Djupna or the chanting bridge during Ins Fenn are just two of several, but this is an album that finds more meaning as a whole piece rather than in songs. This is also a record that only gets better and more interesting after the initial listen, with further listens revealing more details in the atmosphere and more intricate background effects.
It's a very solid debut full-length, I don't know if you consider the release last year as a full-length or a demo, but definitely worthy of any person who considers themselves fans of atmospheric black metal. It's got a lot of interesting experiments that definitely lend it more towards being ritualistic than other bands. Definitely look into it if you've been searching for something along the lines of black metal that can channel more of that sort of atmosphere.
Overall Score: 8.5
Highlights: Evige Stier, Ins Fenn, Bluostar
Posted by maskofgojira at 6:06 AM