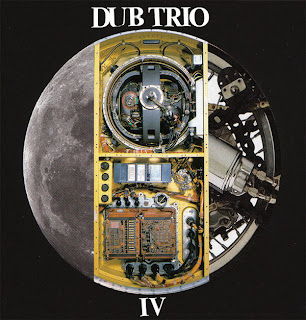 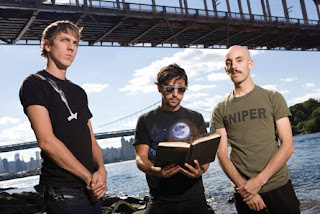 Because I'm a Mike Patton fanboy, it was only natural that I would find my way to the collaboration he did with Dub Trio. He's sang on two of their previous albums and that was my initial gateway into the group itself, which I was later able to find a way into as well. Since then I've returned to the group now and then, but it was finding this album that kind of got me interested in how they were progressing since I had last listened to them, which had to have been over a year now.
As an instrumental group, the trio have been able to vary their style quite a bit, on a song to song based format. In the past they've experimented with the likes of thrash and sludge metal, math rock, reggae, electronic, and pop music, among others as well, but on here, it's a more focused affair. Granted the energy they've always exhibited is still very prominent throughout, so fans don't have to worry about them not sounding very energetic on here. Every member of the trio comes through in the mix really well, and it all sounds so full of life, which made me feel like these guys actually enjoyed what they were playing.
For the most part, this album is probably their heaviest and it contains some of my favorite songs from them, Noise and Patient Zero, but there are also moments on here that just got under my skin. I'll start with the biggest offence, Ends Justify The Means, first. I'm not a fan of dubstep at all, and maybe it's because all the artists I've listened to I've found annoying, but this track just annoyed the living crap out of me because it was a dubstep song. I couldn't tell you if they do it well or not, but it sounds about average to me for the genre. Secondly, the electronic influences the trio have used in the past were nowhere near as annoying as they are on here. On an otherwise average track for them, Words, they're mixing in elements of dubstep, granted it's not a fully dubstep track like the one above, but it proves to be just as annoying. Other electronics used throughout the entire album also reflect more of that influence, which kind of ruined it for me. The last thing that got on my nerves was just how out of place these songs felt, you have some great and headbang worthy rock tracks interspersed with electronic tracks and it just felt totally wrong to me.
Even though by the end, there were more tracks on here that I did like, the bad ones annoyed me to the point where they did damage the album as a whole for me, unfortunately. I love hearing a band experiment with new styles, and I understand wanting to experiment with dubstep, but it annoyed me, personally, more than anything else on here. Definitely check this out though if you want to hear some intense math rock songs mixed with some rather lackluster, to me again, dubstep stuff.
Overall Score: 5.5
Highlights: Noise, Swarm, Patient Zero
Posted by maskofgojira at 11:19 AM