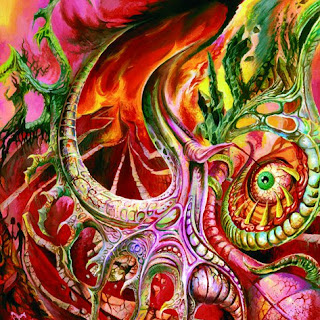 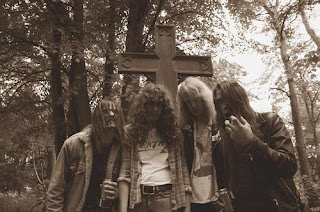 Morbus Chron is a group that's been getting quite a bit of praise for this album, which is why I actually checked it out to begin with. Now, I like old-school sounding death metal, as I've said before, but I'm not willing to check out every band that's been tagged as a part of the new wave of old-school death metal no matter how well they're said to be. I made an exception for this one because of all the hype as well as the colorful artwork, which is something that isn't seen all that often in death metal.
So what was it about this record that made everyone go crazy for it enough that interested me? Well, to be honest, if you're on the look for original sounding death metal bands, you'd best look elsewhere, cause you won't find it here. This is old-school death metal that wears it's influences on it's sleeve. You'll hear hints of some of the obvious ones in here like Death, Autopsy, and Entombed, but also traces of Dismember, Morbid Angel, and Asphyx, which, and this is to their credit, that they can pull off sounding like each of these bands well enough to the point where it doesn't sound like a cheap knockoff, but something that's just a big influence. Each song manages to pull off a different kind of vibe, some more doomy, Lidless Coffin, while some are more upbeat and thrashy, Dead Body Pile Necrophile, and others prove to be a lot more melodic, Creepy Creeping Creep, but they all sound very fresh and full of life.
But what's been getting everyone so into this record has been, really, the only the that actually matters, the songwriting. I've heard people raving about how these songs each have their own personality and that, despite the influences coming through very clearly, they're all pulled off really well, which I do have to agree with. It's impossible to deny the absolute mastery with which these musicians have crafted these songs with and how great they made them into. It's hard not to understand why people are digging this record so much when songs like The Hallucinating Dead and Ways of Torture stick out, among many others, as sore thumbs on here with how catchy they are. I mean, I know it's hard to believe, but a lot of these songs have actually managed to stick with me, and apparently many others since a first listen. Each of these songs are pretty short, with only the last two actually crossing the four minute bar, and they get done in that short a time what takes most bands doing a similar style and formula easily an entire record, if that, to get done.
Overall, it's a really solid piece of work that I understand why people are going nuts for it. I'm not really as gaga for this as some of the people who've turned me onto this but I certainly understand where they're coming from now, and hopefully you will as well. Definitely check this out if you like old-school death metal with a lot of personality.
Overall Score: 8
Highlights: Creepy Creeping Creep, The Hallucinating Dead, Deformation of The Dark Matter
Posted by maskofgojira at 10:33 AM