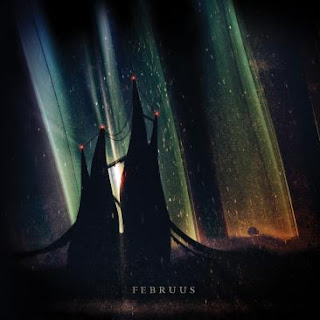 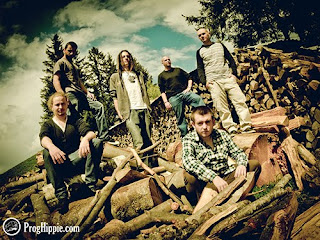 I've been waiting to talk about this album because I've been looking forward to it for quite a while. When I first found the whole "djent" scene, pretty much every band I found was doing something interesting, which has since died down, both my interest and the band's originality. Uneven Structure was one of the first bands I found with that tag and are still one of the handful that I hold to a much higher standard than the rest.
What interested me in the first place with these guys was their use of great ambiance and atmospheres while still creating heavy grooves. The comparison to TesseracT is apparent and does fit, but I'd say that these guys have a much more beefier and bulky sound. These guys make a more balanced sounding record that combines the pretty ambient soundscapes with heavy and djent based guitar riffs, which written out might not sound all that exciting, but works surprisingly well, especially if you might be new to these guys. This is, in my opinion, a massive step up from their EP, "8," which was released back in 2009, in almost every sense of the word. The band has done away with the blatant Meshuggah worship sound present on there in favor of a far more original and interesting sound. I also give these guys a lot of credit for creating a double-album that features two very different aspects of their sound, the first, being the djenty metal album, and the second, a drone and ambient based one.
What is perhaps their greatest strength is that there is a very clear post-rock/post-metal influence in their sound. Unlike TesseracT, where you kind of had songs that maintained a more ambient soundscape throughout a single track, on here you get build ups and falls that create a better sense of contrast. The contrasts between the heavier Awaken and Frost and the more melodic sensibilities swirling beneath songs like Buds or Quittance are the types of ideas I look for in a band that associates itself with the whole "post" sort of ideal system. Adding to that aspect would have to be that since the entire album is pretty much a single piece of music, you really get the ups and downs when you listen to the whole thing from start to finish. But it's the fact that on their own, these songs still work and manage to provide memorable sections without ever making use of the tried-and-true method of a chorus that makes it all the better. As a sidenote, I'm partial towards music like this that sounds huge and has a great atmosphere surrounding it; the Devin Townsend influence rings true on here. But I'm sure it's the second disc that will turn some heads, cause I think, if you did already know of the band beforehand, the first disc will be exactly what you wanted from the band, but the droning ambient soundscapes might turn people off, since those aren't really styles that get people excited, for the most part. I'll admit that these last three tracks are more background music, but they are well suited and interesting pieces of sound and texture with various noises and voices being heard throughout all of them.
I think these guys did a great job, and the wait was definitely worth it in my opinion. This is what djent bands should be striving to accomplish, originality in sound and memorable parts. Definitely check this out if you want to hear a great new progressive djenty metal band with a lot of experimentation and atmosphere.
Overall Score: 9
Highlights: Frost, Quittance, Plentitude
Posted by maskofgojira at 11:15 AM