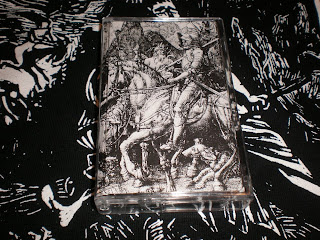 This year has seen an increase in the number of bands fusing black metal with punk, to more critical acclaim or just being signed to more labels I listen to, in my opinion. Wands has been releasing several really solid releases, I think this is their third or fourth overall release and it keeps in their tradition, so far, of releasing black metal with attitude. This debut tape from a band I can't find information about made it interesting to write this review, as you can see, I do not know where they're from.
This four song EP is ten minutes of blistering blackened punk that sounds probably like how it was actually recorded, live in someone's basement. The drums are very loud and propulsive with the guitars and bass are really distorted, but still clear enough to make out what they're doing, and thank god for that. Finally you have the vocalist, who sounds like he's bouncing off the walls, since his vocals just go everywhere, in the mix I mean. These songs are short and simple, with the riffs being pretty immediate, even though they all do it, Raped By Sin would be a good starting point since it's the shortest song on here. This is the sort of record you put on when you want to go break stuff or go fight someone, or just get pumped up, whatever works for you, cause it's just no-nonsense, fist-in-the-face, blackened punk.
Overall, it's a nice starting point for a new band, there really isn't anything wrong with this EP if you know what you're getting yourself into. Sure, the recording is a bit loud and can be overbearing at times, but that doesn't really matter too much when you imagine these guys just assaulting the live stage, like I do, when they're playing this stuff. Check it out if you're into loud and abrasive black metal or punk, Wands has it up for free download.
Overall Score: 7.5
Highlights: Erde Verfault, Motherless
Posted by maskofgojira at 8:33 AM