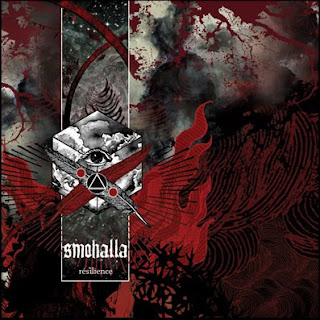 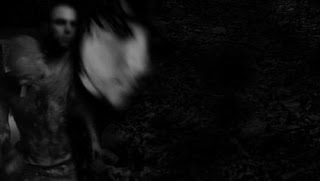 I've been awaiting Smohalla's debut full-length for several years now, and the time has finally come. Ever since I stumbled across the trio's work about three or four years ago I have awaited any new material that would turn up. It's been in the works for about three years, but will it have all been worth it?
Smohalla, as a band, have gone through quite an evolution from when I found them to where they are now. The trio started off as something on a comparable plane to kind of what Emperor was doing on their last album with more progressive leaning structures and riffs, but melded with symphonic synthes and orchestrations that kind of took on a different shape than most bands that are in the whole symphonic black metal scene. In their more recent material, and even the covers they've done of groups like Emperor and Ulver, have shown them creating and cultivating something more original. The inclusion of more electronics and styles that at times ranged from lounge and jazz to industrial and ambient really moved them past being just another symphonic-ish band. By the time this album opens up, I kind of see them following a similar path to their elderly statesmen in Blut Aus Nord, making black metal that's more abstract and isn't to contained in being just "black metal."
Sonically, and thus the reason for the Blut Aus Nord comparison, there's a lot to find on here. As I said, it isn't solely black metal, you'll find the more symphonic elements of their past, more ambient and industrial stylings can be found throughout, as well as an almost progressive sense of composition and writing styles. There are moments on here where the music just hits this point and it just explodes into this grandiose and epic sounding peak, the middle of Oracle Rouge for example, and those are the moments that just push it past being just another avant-garde black metal record. The black metal moments are far more in the vein of their French co-hordes, making use of slower, and more mid-tempo, dissonant sort of riffs that tend to lean more into progressive territory as well. Even when this album goes into more black metal mode, it's far from any sort of kvlt or trve sort of riffing that you'd find in the likes of Darkthrone or Mayhem's early output. There's a lot going on, which is probably the record's one downfall, in my opinion anyway, it's not the sort of record that'll make you want to thrash around and rock out in the car, it's much denser and full of different soundscape. It's a tough nut to crack and it is a bit taxing at times, but if you're one of those people that this manages to click with you, congratulations, you've just found a great record on your hands.
I really love this sort of stuff and it's probably what I feel most comfortable talking about because I have a history with more avant-garde and progressive leaning black metal, so this is the sort of record that just gets my blood boiling. It's the type of record which, unfortunately, will probably resonate with you or it won't. I highly recommend this for anyone that likes forward thinking black metal because it clearly is pushing the genre into a different realm of abstraction.
Overall Score: 9.5
Highlights: Every Song Is A Highlight
Posted by maskofgojira at 11:17 AM