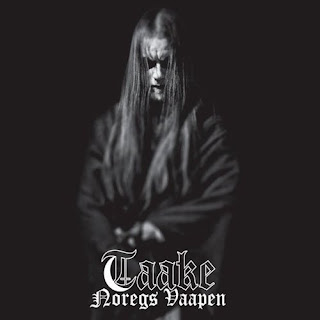 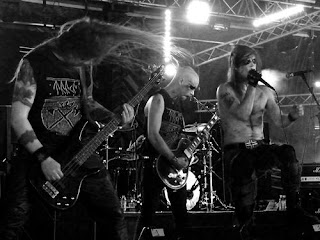 The whole Norwegian black metal scene has really gone into a state of decline since the 90's second wave, take that any way you like. It really seems that most of the bands that came out back then are still the ones creating, and releasing, the best stuff coming out of Norway. Taake, obviously one of those bands, is no exception to that opinion.
Taake has always been a band of change, if only slightly varying their sound throughout each of their records, and this one is no exception. The melding of black metal with more straightforward heavy metal riffs is nothing new, but the ability to make it work in a way that isn't cheesy or totally incompetent shows a real talent. Much like what Glorior Belli had done with their most recent record, the riffs, while simplistic, also are much more memorable and the songs have many more hooks in them than ever before. Perhaps the whole idea of black'n'roll actually making its way into becoming a legitimate genre, or sub-sub genre, whathaveyou, will turn off those that want their black metal to be free from all outside influences and remain as hate fueled and raw as possible, but you can't deny the presence of legends from the scene's yesteryears certainly at least give the nod of approval for the likes of Taake. You don't have to do math on your guitar to be a good player, sometimes all it takes is a good riff.
But besides that, what else can you say about this, it's Taake being Taake. The production is a bit crisper sounding than a few of their other records. It's not super polished or clean, but it is a lot less muggy and hazy sounding than even the self-titled record. Everything just comes out so much more fuller sounding than ever before, and things cut through when they need to, like the banjo solo on Myr, which is awesome by the way. Once again, the little kvlt kids who love their early Darkthrone and Mayhem records, which by the way Nocturno Culto and Attila Csihar both guest on here, who hide in their parent's basements pretending to look dark and pondering how they can become the next Varg, will probably hate this for being too clean, but if you're a true fan of good songwriting and riff-driven music, this is right up your alley.
I don't know how to say how good this is other than you just have to check it out. It's got all the right elements to take Taake to the next level while still keeping their sound pretty trve to their roots. Definitely check this out if you want to hear some headbang-able black metal with riffs.
Overall Score: 9
Highlights: Orkan, Du Ville Ville Vestland, Myr
Posted by maskofgojira at 9:34 AM