The Universe Divide - Dust Settles On The Odontophobes EP (2011) 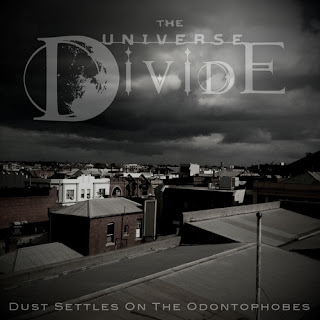 When it comes to instrumental metal/rock, Canvas Solaris is probably one of the most well respected and well known groups out there. When I was told that this new project was formed from members of the band, I was intrigued. This short little EP is comprised of guitarist Chris Rushing, bassist Gael Pirlot, and drummer Jason Parker.
This is one of those releases that has elements that I do enjoy a lot, but also has parts that I'm just not a fan of. In my opinion this is one of those releases that definitely takes riff and song based instrumental progressive metal and does it well, there are memorable parts that make me kind of think of what Canvas Solaris, or a newer group like Animals As Leaders, are doing; but then you also have those moments that feel like complete wankery, that I'm just not all that into. Shredding a lot is fine, but I feel that there needs to be something to kind of make it worth while, whether it be a vocalist singing, or growling, screaming, etc. over the top of it, or some sort of change that makes it feel warranted. Luckily, this leans more towards the former, with very few occurrences that make it lean into the boredom that is a lot of instrumental progressive metal. The djent-y parts do feel a little forced though, Of Optimism The Glass Vein, which kind of rubbed me the wrong way, even if it is done well. For the most part, it's well constructed and performed, but I could use a bit more life in these songs. A lot of this feels very mechanical, not all of it mind you, but a lot of it does.
In the end, I did enjoy it, and I like the variation among tracks. I hope these guys begin to traverse more territory than they did in Canvas Solaris, because I feel that that is where they shine. Check it out if you like more progressive leaning instrumental music.
Overall Score: 7
Highlights: Cyclical Procession, Curator of The Seventh Automoton
Posted by maskofgojira at 11:04 AM