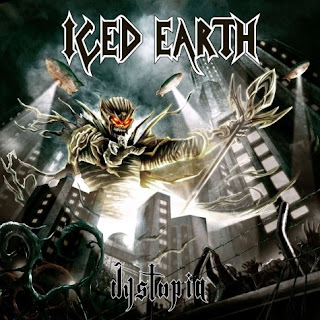 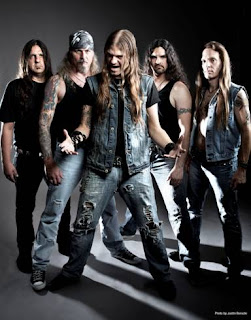 Iced Earth is one of those bands that I've grown up with since I was little. My father being a fan of theirs so I have listened to them for quite some time before I ever even got into "metal." Later getting into Into Eternity, I was quite excited to see what Iced Earth would do with Stu Block as their new vocalist.
Stu Block is a great vocalist, I'll say up front that he does a great job on here, there's little question about his range and performance, but it'll take more than this album to convince me of his place in the band. I'm a fan of his voice, as I just said above, I like Into Eternity, but I was also a fan of Tim "Ripper" Owens and of course Matt Barlow. I'm sure like me, many fans will always find Barlow to be the true vocalist of Iced Earth if only because of his presence on some of their classic albums, his tenure in the band did earn him that title, so I'm only a little skeptical because this is Block's first album with the band. I'm sure by the next album I'll start to acknowledge his presence as a key part in the band and not just another singer. But like I said, his voice is great, and he is obviously gifted with a fantastic range that has brought him much fame, but on here, he esques the harsher side of his range in favor of a more mid-range style that definitely sounds like Barlow in many spots. He does bring out his trademark dog-whistle highs in spots, trumping Ripper in that style, but luckily those aren't overused. His entire range is perhaps used best on a track like Boiling Point or Dark City where he goes from lower, Barlow style to really high falsetto at the snap of a dime.
As many others have noticed with this album, the entire band sounds revitalized and much more on point than on their last couple. The songs on here are much more energetic and full of energy, even the softer moments, Anguish of Youth, that hasn't been found in their albums for several years. The songwriting is also much better, with the opening four tracks just nailing you over and over with great hooks and riffs. Now, after those initial four tracks, the album does fall off a little bit, V sounds a little too cheesy for me, a little too power metal if you will, and feels like it would be more appropriately performed by a group like Gamma Ray. Now, I'll freely admit that when it comes to modern thrash and power metal, I've totally out of the loop, but from skimming random albums from the genres throughout the year, this is one of the most memorable and energetic releases from those genres this year, in my opinion.
As a whole, this is definitely one the band's better albums in a while, but it's still not a masterpiece. I know other reviews and people who have heard it are in a similar spot that I'm in, it's good but not great. Definitely look into it if you're a long time fan of the band, you will not be disappointed, or if you want to hear a very strong sounding power/thrash metal album.
Overall Score: 8
Highlights: Dystopia, Anthem, End of Innocence
Posted by maskofgojira at 8:12 AM