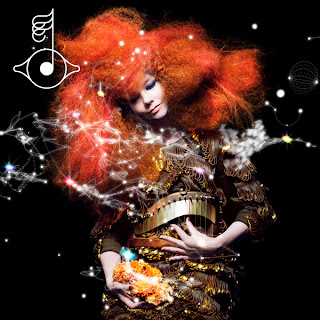 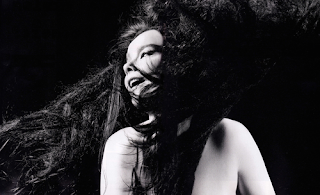 If you're into experimental music Björk is one name that you pretty much have to have at least heard of. Her work is some of the most unique and interesting "pop" music that has come out within the last couple of decades. This album is the very first I-pad album, whatever that is, so it's meant to be an even more original album if you buy the apps that go with it.
I just want to say right away that I didn't buy any of the apps for this album mainly because I just wanted to music, I didn't need anything associated with it. This new album takes Björk's work in the past and makes it look simplistic in terms of experimental tendencies compared to this. Whether or not you find it ambitious, pretentious, or whatever, this new album moves away from formatted songwriting and into more soundscapes that encompass Björk's ideas and concepts. As you might imagine, this leads the album into very weird directions. You'd be right on about that. Musically, it's very diverse, ranging from minimalistic organ passages to breakbeat drums, along with that, Björk's voice continues fluttering between her voice alone and large choir harmonies. A lot of these songs feel more like stories rather than songs, if you get what I mean by that, Cosmogony should demonstrate it.
I totally get why people would hate this, I mean it's abstract and totally out there, and there really isn't a whole lot of melody besides Björk's voice, and even that's not the easier point of entry on here. Even compared to an album of hers like "Medúlla," this is still very left-field. This is not the type of album with tons of memorable hooks and musical passages that'll make you want to return to it over and over again, there really aren't a whole lot of hooks or catchy melodies, there are some, Crystaline for example, but for the most part these songs are pretty hard to get into. In my opinion, while most of these songs have at least one element that is easy to get into, I found Hollow to be a head scratcher, cause I really, REALLY, didn't get the intention behind it. The song just sort of drones along for almost six minutes without a whole lot of coherence and there really isn't a whole lot that made me want to listen to the song continuously like some of the other songs on here did. Despite the more minimal approach on here, like I just said, there's usually at least one thing that should be a point of entry for a song, I found a lot of the instrumentation was actually quite fitting for what she was going for lyrically, Mutual Core is possibly the catchiest song on here in my opinion, because musically, I find it quite dynamic between the droning organ during the verses and the heavy electronic beats during the chorus, which itself is pretty memorable.
In the end, while I did enjoy it for the most part, I'd still rather listen to her other material before turning to this one. There are several songs on here that I do like very much, but I don't find this to be her best record, but that's just my opinion. If you like Björk feel free to disagree and like this album as much as you want, but if you've been looking for a point of entry into her music, you best look to her early albums, not this one.
Overall Score: 7.5
Highlights: Thunderbolt, Cosmogony, Mutual Core
Posted by maskofgojira at 9:31 AM