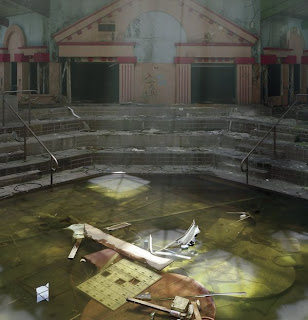 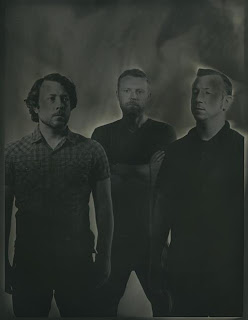 At this point in Locrian's career, this is their fourth full-length and they've released somewhere around a dozen other releases throughout their career, you'd think they might release something that's below brilliant, but not yet. This new record may be their shortest overall full-length, both in number of songs and total length, but you'll come to see that it is probably their best. A new Locrian release is always a reason to celebrate.
In the past, with the material that I've actually heard, Locrian has always been a dark band, but I feel like on here they're really pushing it into almost depressing territory at times. The opening piano line on Chalk Point just sends shivers down my spine whenever I hear it. There are moments on here that are just brutal and intense as the stuff on the last half of "The Crystal World" but this is even more focused in my opinion. It's been honed to a very fine point where there isn't a weak spot in sight, or in sound if you will, on here. Much like my favorite bands of all time, none of which remotely sound like Locrian by the way, Locrian transcends the description of a genre term, morphing the extremely chaotic and noisy with beautiful and tranquil sounds while all the while shifting their sound in one form or another to bring out new elements or highlight certain aspects of their sound.
In my opinion, and I know people will disagree with this but, this record has a lot more of a post-rock kind of vibe to it than their other work. In the past the krautrock, dark ambient, black metal, etc. were all kind of melded together and filtered through a drone sort of filter, but on here, I feel like they added more of that beauty and light from post-rock, not so much in instrumentation as much in crescendos, climaxing, and contrasting sides, to their sound. But even saying that, the lines are probably just as blurred, if not more so, on here than on their previous work, where you can have a sort of slow and very tense synthe piece in the foreground that's just bursting at the seams with black metal underneath, Augury In An Evaporating Tower. This record also doesn't feel as noisy to me, it has a lot more atmosphere and ambiance covering the layers of noise, cause it is still there, but it's definitely not as up front and in-your-face as earlier records. To an extent, the entire record could be seen as a build-up to the concluding title-track, The Clearing. There are times when that krautrock comes out a little bit more and things tend to feel a bit more "jammy" than others, but I feel that it's this sort of record that I love, personally, and I hope others feel similarly about as well, where you can have very dynamic and structured pieces while other have sections that are more open to interpretation.
This is a record that it's hard to really describe in words simply because there's a lot to really try and sum up in a couple of paragraphs. It's record you have to hear to really believe, it's really awe inspiring to be honest. Pre-order, order, buy, whenever you look at this, do it so you can get a copy of this as soon as you can, it's that good.
Overall Score: 9.5
Highlights: Every Track Is A Highlight
Posted by maskofgojira at 9:59 AM