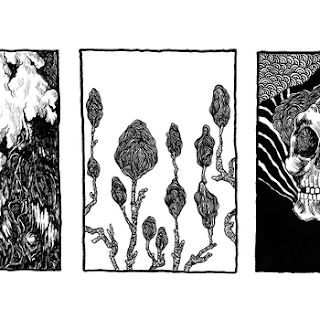 Venowl is a group that I first discovered probably about a year ago, give or take a couple months, but only started listening maybe once we were into the better part of this year. As one of those projects that's in it for outright destruction, I'll admit that it's not the type of band I, or a lot of people, probably listened to every day. I knew going in this was going to be something special.
If you haven't even come into contact with the noise that Venowl creates, consider yourself lucky, it's a brutal and challenging listen, though the ladder varies. On previous releases, the sound has been heavily reliant on a mixture of dense sound collages and intense feedback and noise, but on here, the sound is a little more tangible, if not more intense. I is an intense track that is a tough nut to crack open, but thanks to added percussion and the feedback provided from the bass, it is a still a lot more tangible than previous efforts. It's a song that is constantly shifting between avant-garde noise and droning doom metal. Retaliation on the other hand is a more comprehensible "metal" track. The short opening black metal tremolo picking sequence gives way to droning doom while occasionally lapsing back into black metal territory. To an extent, a Locrian influence can be heard a bit throughout this track. Personally, I prefer the ladder track more if only because there is a more definable core, if you will, that keeps the track a bit more focused throughout it's eight minutes. Thanks to a nice mastering job from Collin Marston, the album feels a lot more balanced, with not everything hitting you at once. I've actually been processing this album for a little while now and it's still one of those albums that I don't think I totally understand it.
Brutal, unnerving, chaotic, and challenging, if you like simplistic music without experimentation, this is obviously not for you. It's a record that throws genres away and sort of throws away any real sense of boundaries and luckily it's only a recording because this the sort of record that would just break all your teeth and give you a black eye if it were actually happening in front of you. Noise for everyone, check it out if you're can actually get on board with that.
Overall Score: 8.5
Highlights: Retaliation
Posted by maskofgojira at 9:30 AM