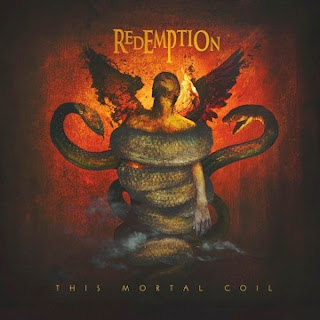 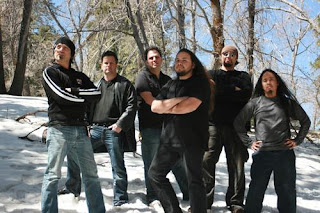 When it comes to the whole progressive metal genre, I'd like to think I'm pretty picky. Redemption is one of those bands that, while I think what they're doing is good, it was vocalist Ray Alder that kept me with them. As a fan of Fates Warning, finding him in this band, several years ago mind you, made me a fan.
The opening to this album really threw me for a loop, Path of The Whirlwind starts off sounding like something you might hear from a modern tech-death band, with crazy bass and guitar harmonies. After hearing that, the rest of the album is noticeably darker and more complex than any of their previous four full-lengths. The sound is a lot denser and solid sounding with a lot less room in the mix for atmosphere and soaring vocal lines. In the end, I don't think that this lives up to how much I enjoyed their 2009 album, "Snowfall On Judgment Day," which was much more melodic and had a lot more atmosphere on it. This thing, at some points, feels very crammed and doesn't feel all that appropriate for Alder's vocals. A lot of these songs feel like his vocals were added on at the very last moment, like every song was pretty much written instrumentally and then they remembered that they actually had a vocalist. A lot of these songs, to me, feel like they probably would have been just as effective as instrumentals as they are with Alder singing on them. That's not something I take pleasure in saying, because like I said above, I'm a fan of his voice, but I feel like a lot of these tracks just didn't need him.
I do feel like this is the band's most accomplished and aggressive record yet, but I also feel that this album is also one of their weakest. A lot of these songs didn't have those moments that made me want to return to the album over and over, like the last one or "The Fullness of Time" did for me. These guys obviously worked hard, and it sounds a lot more complex and in-your-face than any of their other albums, but the mix leaves a lot to be desired and ends up hurting the record a lot. This album will obviously turn a lot of more modern tech-metal/math metal kids onto these guys, if that's any indication of where this album's technicality lies. When the band actually try and do a song more in the vein of the previous material, or more traditional prog-metal, the likes of Let It Rain or Focus, it just winds up feeling so forced and unnatural. Tracks like Departure of The Pale Horse on the other hand sound very close to what the band has done before, a bit more technical maybe, but actually pulls it off with gusto.
By the end of it, I was pretty split down the middle for this. Some songs were pretty good while others were just painfully average and did nothing for me. Check it out if you already like the band, but I highly recommend you looking into this album if you like more of the math/tech metal stuff, because that's kind of where this album is closer to.
Overall Score: 6
Highlights: No Tickets to The Funeral, Perfect, Departure of The Pale Horse
Posted by maskofgojira at 8:15 AM