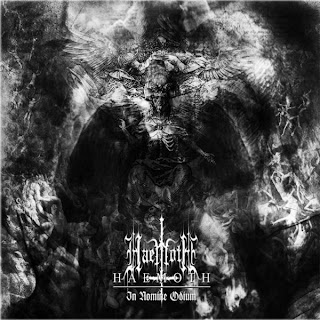 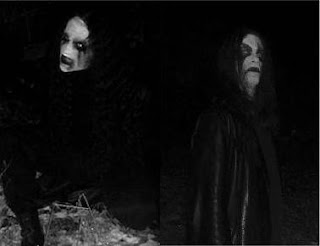 Haemoth is one of those bands that I've had an on/off relationship with since first finding them probably two or three years ago. Since I first found them, I'd listen to them a couple of times, then forget about them for months before finally listening to them again. I was really surprised that there was a seven year gap between this new album and their last full-length.
The first thing that struck me on this album was how raw and hot it sounded. This is not pristine or polished by any means, with the guitars being very sharp and distorted sounding and the atmosphere sounding absolutely cold and cacophonous. It's a very brutal sound that, at times, recalls almost an industrial edge for how fierce and unrelenting it can be, and more in the vein of early industrial and noise music, not NIN industrial. Slaying The Blind hits you like a ton of bricks once it starts, it's honestly like you're in a blizzard with how chaotic and cold it sounds. It's harsh and at times a bit overbearing, I'll admit that, but I don't think any of it is actually bad. The flurry of all this intensity is a lot to take in and quite overwhelming on first listen, but like most things you do become accustomed to it after a point.
From the standpoint of being different from other groups, in all honesty, the sound on here isn't all that original, the whole blizzard of sound I mean anyway. A lot of black metal bands in the same vicinity as these guys aren't nearly as abstract and atmospherically dense, call it a bit of the Spektr side of Haemoth (the musician) coming through. The riffing, while certainly pretty set in the tried and trve way of black metal, occasionally breaks into weirder patterns that fluctuates between being interestingly straightforward or borderline progressive. The use of noise throughout the album as interludes and track buffers is also another indication of a possible Spektr side bridging into Haemoth. I could understand if people didn't really get the noise thing on here because even the main tracks on here, obviously there are a few instrumental interludes, include noise for a duration that could potentially piss some people off if they only wanted to hear the metal side of the band. The two minutes of noise that close Disgrace might seem a little unwarranted by some more hardcore listeners and I totally get that, but for me, it's these rather inconsequential sections of noise that just made this record more than just an average raw black metal record to me.
I really enjoyed the album, I mean, it's not exactly breaking any ground that hasn't already been broken, but it does what it does well. I enjoyed the entire record through it's calmer and more atmospheric moments and it's intense black metal ones. If you enjoy more of the rawer side of black metal and you don't mind a good helping of atmospheric and industrial thrown in as well, I think you'll enjoy this album as much as I did.
Overall Score: 8
Highlights: Demonik Omniscience, Son of The Black Light, ...And Then Came The Decease
Posted by maskofgojira at 9:40 AM