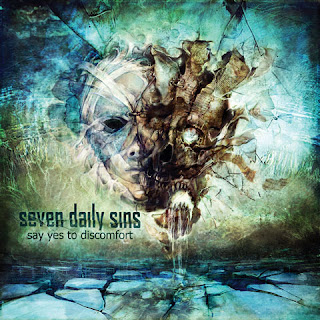 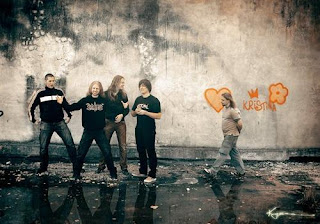 Maybe I dropped the ball on the whole French death metal scene, because up until hearing this band, I never really looked into it. When the band sent me an email about reviewing this, I was interested mainly because I didn't know a whole lot about the death metal scene in France. I was hopeful that this would be pretty interesting from the little bit I had heard before getting it.
Now, in terms of style, this isn't in the lines of the traditional death metal, obviously, but more in the vein of the tech and progressive realms. Influences from the likes of Obscura and Necrophagist as well as The Dillinger Escape Plan and Meshuggah all show through the varied and somewhat disjointed style showcased on here. To be honest, when I had just skimmed through the album, before listening to it straight through a couple of times, I had originally thought that this might be a lot more crazy and spastic than it is. A lot of the songs on here, while certainly far from being straightforward, do feature more melody than I originally expected, which is a positive in my opinion.
Now, for a great majority of the album, what these guys are doing is pretty cool, and I enjoy the breaks into more jazzy and almost funk territory throughout, but there are some things that just feel wrong to me. Aura Breach is probably the main offender only because it feels like a bunch of random parts thrown together without much linking them to one another. Sculpturing Void, unfortunately, opens with something that sounds like modern metalcore, The Devil Wears Prada to be honest, which made me cringe a little, and then has these guitar scratches which just seemed totally out of place to me. The rest of the album was much better paced and constructed with the last couple of tracks really showcasing songs that are not only more memorable, riff wise, but also paced a lot more fluidly. The likes of Ghostalgy and Drown bring in some different influences, from black metal on the former and melodic death metal on the ladder, which fit very well within their own style. In my opinion however, it's Hell Sweet Home that stands out the most on the entire album because it really brought everything together nicely from the more crazy technical parts to the more melodic bridge and proggy solo.
This is a solid album and the majority of it was very well written and performed. In the future, a bit more cohesion would be appreciated, but I think what these guys are doing is pretty cool. Definitely look into this if you enjoy more spastic and off-the-wall death metal.
Overall Score: 7.5
Highlights: Ego, Revisited, Hell Sweet Home, To Enter and Survive
Posted by maskofgojira at 8:21 AM