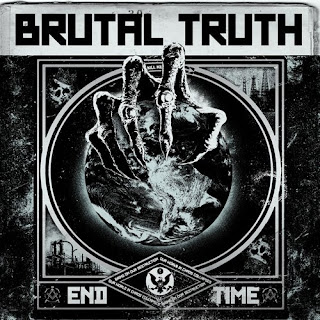 I don't think Brutal Truth needs any introduction at this point in their career. Legendary grindcore group that helped to mainstream the genre in America, their second full-length after reforming back in 2006, I think that sums things up pretty well. I wouldn't say they've ever been my favorite grind band, but they're certainly a good one.
While it may be a bit ignorant of me to say this, I don't think it's unwarranted, I often come into a grindcore album expecting something just to run me over from track one onwards. This record did not do that. Malice, which opens the album, is a dirge of a track that just sort of lumbers around with bass being the prominent leading instrument that kind of guides the track along. It's pretty slow and unnerving, in a sense, but begins in a way that doesn't punch you in the face right away, almost taunting you in a sense. For me, it was almost like they were saying, "After we say this, we're going to hit you," and then they hit you with the following tracks. Most of the other songs on here follow in the band's more traditional style of grindcore, if you could call it traditional.
Personally, and this might just be me but, I found this album to be weaker than their last one, "Evolution Through Revolution." This record just didn't feel as catchy or memorable as that one was, not to say there aren't tracks that didn't stick with me, the crazy d-beat Small Talk or the black metal-ish Addicted definitely remained in my head long after the album had ended. I won't lie, there are tracks on here that just sort of blend together and go nowhere and do nothing for me, but then there are others just are just some of the band's best material. It's all a case of some songs working for me more than others, because the production is on point, letting everyone shine in the mix clearly, but maintaining the crusty nature of the music. I'm also quite partial towards how the band often make it seem like everything is just barely being held together, the ending of some tracks just made it feel like if they had played any longer, the whole track would have become closer to noise than grind, which actually happens in closer Control Room.
I like the album, but unfortunately, I have heard quite a few other grindcore releases this year that I like more. Certainly not a bad album and definitely worthy of the band's legacy, but not a great album. Check it out if like grindcore and you don't already know the band, but otherwise go back in their back catalog first.
Overall Score: 7
Highlights: End Time, Small Talk, Butcher, Sweet Dreams, Drink Up
Posted by maskofgojira at 8:05 AM