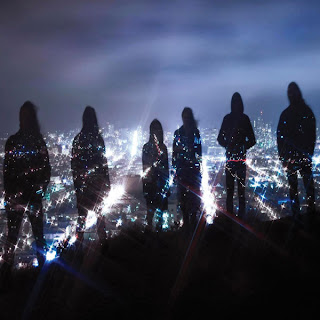 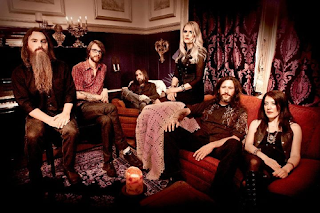 If there's ever been a metal in the last decade to avoid categorization, while remaining metal mind you, it would have to be Hammers of Misfortune. Very few bands have the sound that this band has managed to capture. Having said all that, they're still one of those bands that I enjoy only once in a while.
I have to give credit to where credit is due, Metal Blade, a label I had pretty much written off in the last couple of years due to the majority of their releases being pretty sub-par metalcore/deathcore albums that I had no interest in, have really done a good job this year of expanding outwards into some other styles. But onto the band at hand, HoM is one of those bands that just defies all categorization. In the past, and on here as well, you get a mix of folk rock, traditional heavy metal, 70s prog rock, and a little bit of extreme metal thrown in there once in a while as well, giving you a band that just transcends genres. They're one of those bands that came out a little too late, because it they had come out in the late 70s or early 80s, these guys would be lauded as pioneers, which they are anyway, but would probably be a lot more known and respected, those who know about them do hold them in the highest regard anyway.
I've perceived this record as a little bit of everything they've done in the past kind of thrown into one record with a few new twists thrown in there as well. You have the great guitar harmonies that they've used in the past, but this record is slower, in my opinion, than their last one, and is probably more in line with "The Locust Years" in terms of how doomy it is, but it also keeps more of that old-school prog element from their last record, "Fields/Church of Broken Glass," in the songwriting as well. You can count on the great choruses and fantastic solos throughout, which isn't really anything new, but something that has not stagnated at any point in the band's career yet, and this record just shows a further strengthening of those elements, hear the likes of first single(?) The Grain. One of the absolute highlights on here is The Day The City Died, which I've heard was at least inspired somewhat by soul music, and it's totally obvious listening to the vocals and keyboard lines throughout the song, it's absolutely fantastic. But, I will admit to this record going a bit overboard sometimes, I found the weird 80's sounding prog-ballad Summer Tears to be a bit too long and a little too cheesy for my own personal taste. After that track, Grey Wednesday feels a bit boring in comparison, but closer Going Somewhere totally picks up the slack with it's more proggy direction, and it doesn't get boring at all.
This is a really good album with a lot of really good proggy, heavy metal songs that just click right away. I do think the album does fall off near the end, but it does redeem itself with the last track. Definitely check this out if you want to hear some really good metal, maybe approach with caution if you expect it to be extreme, but if you can handle a more old-school approach, highly recommended.
Overall Score: 8.5
Highlights: 17th Street, The Day The City Died, Going Somewhere
Posted by maskofgojira at 10:24 AM