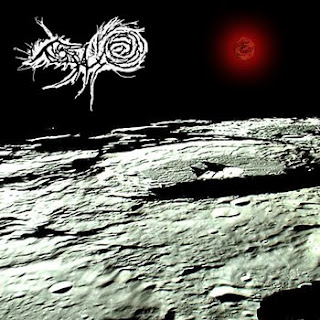 Now, I know what you're probably thinking when you see this album, "Drawing Down The Moon," right? That's what I thought when I first saw this cover, and that, coupled with a nice little review I had read about this got me interested in what this was. Based on what various sources described this as and what the initial review had me thinking of were very different so I came into this a bit uneasy.
What the initial review of this album, the one that first let me know about this album, had told me was that this was some pretty atmospheric, semi-progressive black metal that drew a bit of influence from the whole Cascadian scene. The other sources had informed me that this was an atmospheric, but more depressive black metal album. Now, those two are still pretty similar, but the divide between Cascadian and dsbm scenes is pretty far out in terms of the instrumentation and occasionally performance, especially if it was going to be progressive in some way, so I wasn't sure as to what I was going to get. Thankfully, this album leans a lot heavier on the former. It's interesting that the this thing was labeled as depressive, because, really, it has almost nothing to do with that scene at all, drawing a little bit more from the likes of the whole post-black metal/blackgaze scene.
Now, for the most part, this album does tend to dwell within the really atmospheric and progressive realm of black metal, with obvious hints towards other sub-sub-genres thrown in as well, and like most bands that try and be varied, some work more so than others. Personally, the more traditional approach taken on Vehement Coalescence felt a little forced and out of place when put between two more melodic and atmosphere based tracks. It's not to say it's a bad song, but it feels rather out of place with it's more traditional sort of riffing style and blast-beat ridden drumming amongst more mid-tempo atmosphere based tracks. Even the closer, The Immortal Plague, has some of that more traditional vibe, but it's much more even handed with the progressive side of the band, trading in brute force and chainsaw tremolo picking for more abrasive sounding discordance. With that being said, the rest of the album is pretty consistent, bringing in a bit of clean guitar occasionally, that blackgaze influence, to really spice up the air behind the electric guitar or to just introduce a more melancholic melody into the song. Personally, I tended to favor more of the melancholic dirges over the faster and more technical tracks, but that's just me, I'm sure for some it'll be the other way around.
It's a pretty solid debut with a lot of potential for future expansion if they continue on this path. The traces of blackgaze may throw some people off, but those elements aren't a huge part of the album so any qualms about that should hopefully be cleared. Check it out if you like really atmospheric, semi-prog black metal, chances are you'll find a really cool band here.
Overall Score: 8
Highlights: Internal Deliquescence, Lustrate
Posted by maskofgojira at 11:43 AM