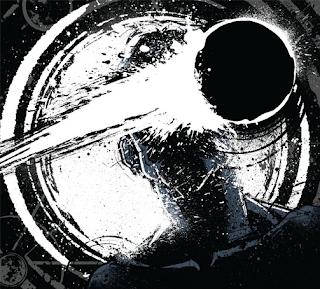 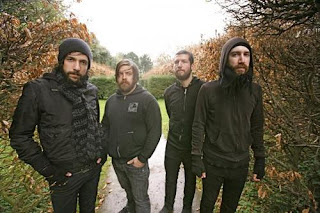 Yesterday I covered the most recent full-length from Junius, but what we have here is short split with two songs from both Junius and Rosetta. Both bands have elements of post-rock in their sound, but are predominantly different from each other. Both bands have garnered attention for the unique style, though both come from different scenes, the split was a pairing that I'm sure many could see working.
The two songs that Junius contribute to this split feature two different sides of their sound. Unlike their recent full-length, the first song on here, A Dark Day With Night, features a much clearer post-rock core. Sure, the alternative Deftones vibe still remains, but you notice a longer instrumental break into a very clear post-rock guitar climax that was not present on the full-length. On the other hand, Fire Head is much more of a traditional song. It still retains a higher lever of post-rock in it's performance, but it's indubitably a much more accessible song than the other song they contributed. Now, like I said in my review of their newest full-length, I enjoy their Deftones-esque vibe, but I think I actually would have preferred it if they had done a bit more with the post-rock sounds on here on that record, because they're really well done. 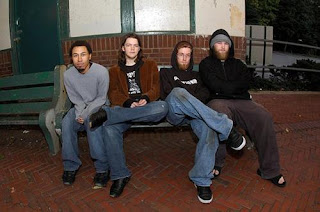 Now we get to one of the most original bands to recently emerge from the post-metal scene since it's inception. Rosetta have been known for their take on the genre which had the melding of noise, ambient, and space rock qualities blurring the lines of their post-metal tag. The two tracks they contribute to this split definitely don't expand their bubble as much as their full-lengths, but certainly work well with when they've been doing recently. TMA-3 is an epic piece of post-metal with loads of low-end rumble with excellent drum work just pounding throughout. The second track is a cover of Soundgarden's 4th of July. Rosetta turn the song from it's already slow and sludgy self and make it even slower.
This is one of those splits that is likely to appeal to the fans of the bands more than anyone else, if only because as far as I know, in the world of post-metal, these are two names that don't really get name-dropped that often. This is just one of those releases that makes you feel good you listened to because it has two great bands working together for a common goal. I definitely recommend you look into this if you like post-metal/rock because it'll hopefully turn you onto two really good bands.
Overall Score: 8
Highlights: A Dark Day With Night, TMA-3
Posted by maskofgojira at 11:36 AM